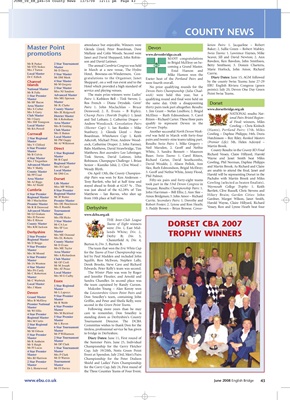 Exeter heat of the Portland Pairs and

Channel 4 Star Master Sheppard , on a well run event and to the by the county Swiss Teams; June 27-29

2 Star Master No prior qualifying rounds for the

Advanced Master The main prize-winners were: Ladies’ wick) were held this year, but a Point Swiss Teams.

3. Geoff and Nethie White, Jenny Flood, are unable to attend the final, Janet and

Mr PP Coad Mr DM Cox On April 13th, the County Champion- Harold will be representing Dorset in the

Tony Bartlett, who led at half time and Cowling (selected as beaten finalists).

Cumbria 8 Star Premier was just ahead of the 62.28% of Tim Bartlett, Clive Russell, Chris Stevens and

Mrs ME Taylor The team that won the Eric White Cup

Area Master for the Teams of Four Championship was

Mrs A Richardson led by Paul Madden and included John

Griffin, and Peter and Sheila Kelly, were

Mr WJ Ellis Master Following more years than he may

Committee wishes to thank Don for the

Master tireless, professional service he has given

Championship for the Gerry Fletcher