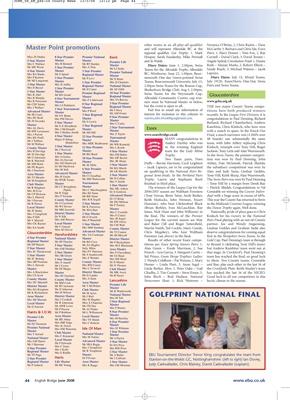 Master Point promotions and will represent Allendale BC at the McCarthy 3. Barbara and Chris Ide. Essex

Mrs R Perryman Master ners must be National Master or below, www.gcba.org.uk

Mrs LI Parkhurst Regional Master but the event is open to all. THE two major County Teams compe-

Mr AM Foster interest for inclusion in this column to

with a match to spare. In the Knock-Out

Trophy. In the Swiss Teams, the premier competi-

Mr PE Rogers Dr MJ Hardwick – Jacek Lapszys, are to be congratulated the subsidiary competition was won by

Mr R Bingham Mrs ML Aitken The winners of the League Cup for the – Patrick Shields. Congratulations to Val

Dr N Silk Mrs S Craker the final. The winners of the Premier Kinloch for his victory in the National

Gloucestershire Herefordshire Mrs YA Cookman Mr JH Metcalf Foresters (see above) in the final. first in the Shropshire Swiss Teams. In the

Results of other recent Essex compe- Gold Cup, Paul Denning’s team is through