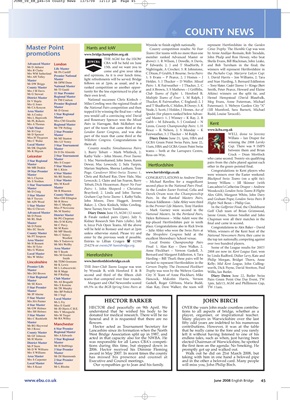 Wyeside to finish eighth nationally. represent Hertfordshire in the Garden

promotions www.bridge.hampshire.org.uk Teams (for teams with no more than one

THE AGM for the HIOW

Advanced Master London CBA will be held on June

P Edwards; 2. J and T Shadforth, F and Bob Turnham in the final; the

Life Master 15th. and we want you to

Mrs B Clarke Nightingale, A Crocker; 3. R Johnstone, winners will represent Hertfordshire in

Mr PA Cardiff come and give your ideas

Mrs AH Tulley Premier National and opinions. As it is over lunch time,

Mr DW Briggs follows on at 2pm. as usual, and is a

tunity for the less experienced to play at

Regional Master their own level.

Mr CA Kenyon the National Pairs competition and then

topped it by winning the final too – what

you would call a convincing win! David

part of the team that came third at the

Local Master 3 Star Tournament them all.

11am, HBA and GCBA Green Point Swiss Cup. There was 9 IMPS

Ms K Higson teams – both at the Larruperz Centre, between them and Brian

Mrs S Cooper pairs from the clubs played against each

Mr MR Deakin 5 Star Master other in the green-pointed final.

Master were winners over the Easter weekend:

Miss P Newsome In the Golfprint Final, the Chislehurst

Mr RL Shah Chapman won all their matches in the

Mr MP Sheedy White, winners of the Kent heat of the

Mrs C Sidney- unless otherwise stated. Please try and the Shropshire Congress held at the

Area Master Some of the League results for 2007/

Smith Harding – Bill Thurl; these pairs will be

Master Mr R Mapp by Wyeside B, with Hereford E & B Trophy was won by the Welwyn Garden

Mrs SH Holmes Mrs Y Mizuguchi understand that he wished his body to be tions to all aspects of bridge, whether as a

3 Star Master Mrs M Treger donated for medical research. There will be no player, organiser, or inspirational teacher.

Master flowers. fifty odd years are indebted to his numerous

Hector acted as Tournament Secretary for contributions. However, it was at the table

Mr GF Johnson Mrs A Edwards West Bridge Association split up in 1987, and left it without having listened to one of his

Mr H Martin 3 Star Regional acted in that capacity also for the NWBA. He endless tales, such as when, just having been

District Master Master was responsible for all Lancs CBA’s competi- elected Chairman of Warwickshire, he spotted

Mr P Stern Mr H Stubbings tions during this time, but stepped down in the first item on the agenda: No Smoking. He

Mrs S Carpenter 2 Star Premier Executive and Council meetings. and in the other a beloved card. Many people

Our sympathies go to Jean and his family. will miss you, John Philip Birch.