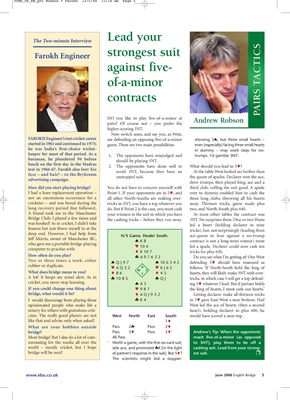 The Two-minute Interview Lead your

pairs? Of course not – you prefer the

Now switch seats, and say you, as West,

started in 1961 and continued to 1975; game. There are two main possibilities: even (especially) facing three small hearts

keeper for most of that period. As a 1. The opponents have misjudged and trumps. I’d gamble 3NT.

batsman, he plundered 94 before should be playing 3NT.

lunch on the first day in the Madras 2. The opponents have done well to What should you lead to 5♦?

avoid 3NT, because they have an At the table West looked no further than

face – and hair! – to the Brylcreem

unstopped suit. the queen of spades. Declarer won the ace,

drew trumps, then played king, ace and a

How did you start playing bridge? You do not have to concern yourself with third club, ruffing the suit good. A spade

I had a knee replacement operation – Point 1. If your opponents are in 5♦, and over to dummy enabled him to cash the

not an uncommon occurrence for a all other North-Souths are making over- three long clubs, throwing all his hearts

cricketer – and was bored during the tricks in 3NT, you have a top whatever you away. Thirteen tricks, game made plus

long recovery period that followed. do. But if Point 2 is the case, you must cash two, and North-South plus 640.

Bridge Club; I played a few times and the cashing tricks – before they run away. 3NT. No surprises there. One or two Wests

was hooked! As in cricket, I didn’t take led a heart (holding declarer to nine

lessons but just threw myself in at the tricks), but, not surprisingly (leading from

deep end. However, I had help from N/S Game. Dealer South. ace-queen to four against a no-trump

Jeff Morris, owner of Manchester BC,

♠K8 contract is not a long-term winner) most

who gave me a portable bridge-playing

computer to practise with.

rubber or duplicate. ♥ AQ32 N ♥KJ65 follows: ‘If North-South hold the king of

cricket, you never stop learning. ♠A3 ing 5♦ whatever I lead. But if partner holds

If you could change one thing about ♥987 the king of hearts, I must cash our hearts.’

bridge, what would it be? ♦AQJ952 Letting declarer make all thirteen tricks

I would discourage from playing those ♣K4 in 5♦ gave East-West a near bottom. Had

misery for others with gratuitous criti- heart), holding declarer to plus 600, he

cism. The really good players are not West North East South would have scored a near-top.

What are your hobbies outside Pass 2♣ Pass 2♦

More bridge! But I also do a lot of com- All Pass reach five-of-a-minor (as opposed

mentating for the media all over the 1

Worth a game, with the fine six-card suit, to 3NT), play them to be off a

world – mostly cricket, but I hope side ace, and promoted ♣K (in the light cashing suit. Lead from your strong-

bridge will be next! of partner’s response in the suit). But 5♦? est suit.