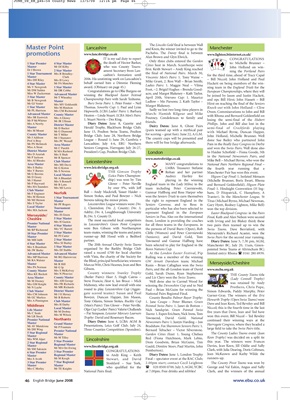 The Lincoln Gold final is between Wall

Master Point Lancashire and Knox, the winner invited to go to the Manchester

IT is my sad duty to report CONGRATULATIONS

the death of Hector Barker, Only three clubs entered the Garden

for the third time, ahead of Tracy Capal

ning team in the England Trials for the

European Championships, where they will

3 Star Master be joined by Jason and Justin Hackett,

Owen. Commiserations to John and Bill

with Rhona and Bernard Goldenfield on

Mrs A Newby District Master Phillips. John and Bill also lost in the

Club Master Leicestershire MANY congratulations to

Rohan and her partner Manchester Pair has won this event.

Simon Stokes, and Paul Bowyer – Nick won the Seniors Trials to earn themselves Tranter). In the Manchester League, St

Mrs MA Jackson particular who has also been selected to won the top division.

Easter Blackpool Congress: in the Pairs

Merseyside/ B; Div. 5, County D. Seniors in Pau. Also on the international Final, Kath and Alan Nelson were second

Mrs H Gaskin The most successful local competitors front, London is providing the coaches with Irving and Joy Blakey third; these

Master 4 Star Master for all three teams in the Europeans, in two pairs then teamed up to win the

Mrs S Bramham 1 Star Master been selected to play for England in the Manchester BC. July 20, 11am, Green-

Mrs MP Harrison Mr RG Harrowven with Vista, the charity of the Society for Railing was a member of the winning

Mahoney, who now lead overall with one winning the Devonshire Cup and to Ned

5 Star Premier Lincolnshire this year. The winners were Frances

National Pairs final. at 7.00pm. Free drinks and nibbles! Clark, and the winners of the annual