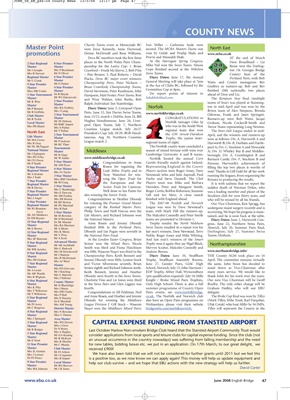 promotions Denise McDowall and Rose Williams. won by Gulab and Pradip Shah, and

Mr U Cotuk General Meeting will take place at 7pm

9 Star Premier at the Ace of Clubs BC, followed by the

1 Star Tournament Dr B Hnyda Hampson, Matt Foster. Pivot Teams, Ron Do report points of interest to ahead of Dave and Liz.

Mr K Wise teams of four) was played at Stanning-

Life Master April, and the winners and runners-up

Master taneous. Aug 30, Northern Counties Trophy, the junior inter- were as follows: Div. A, Hurworth A and

The Norfolk county team concluded a pool A; Div. C, Stockton A and Newcastle

National Master Master Middlesex season of mixed fortune with wins over A; Div. D, Whitley Bay B and Middles-

Mr J Eglington Mr B Algar Cambridge University A and B teams.

borough; Div. E, Cramlington B and

Mrs JA Taylor Lady Milne Trophy and to Players section were Roger Amey, Dave note! Thanks to Gill Gold for all her work

3 Star Master running the leagues, from organising the

Miss BM Cheetham ning the Open Trials for Darby and Steve Dannell. The Club fixtures to producing the results.

sudden death of Norman Dykes, who

Well done to Ian Panto for Roger Cortis, Robbie Roberson, Suzanne was a leading member and player of the

Mrs J Angel Mrs JM Horton Congratulations to Heather Dhondy finished with England ahead. who will be missed by all his friends.

Our Vice-Chairman, Ken Spragg, has

Joyce 1 Star Master Philip Town and Neill Harcus won the team, with Mark Hill the runners-up. recovering. We hope his progress is main-

Mr AN Matthews Mr M Bowden Life Masters, and Richard Johnson won The Malcolm Connolly and Peter Smith tained, and he is soon back at the table.

At the London Easter Congress, Brian And last year’s winners of the Smart

Keith Bennett, Jeremy and Heather EDP Trophy, Abbey Hall, Wymondham many years service. We would like to

Mrs L Marriott Dhondy were fourth in the Swiss Teams. (pre-qualification required). July 18, Mills thank John for his work over the years.

Master Mr D Blacklidge in the Swiss Pairs and Glyn Liggins was Girls High School. There is also a full Boulby. The only other change will be

and Anne Rosen, and Heather and Jeremy co.uk. The Norfolk and Norwich club The Broke Cup final was won by Tilley

Ms GA Keating consider applications from local sports and leisure clubs for capital expense funding. Since the club (not

11 Star Premier Mr C Mundy for new tables, bidding boxes etc. we put in an application. On 17th March, to our great delight, we

Dr PJ Prince Mrs B Impett is a positive too, as we now know we can apply again! This money will help us update equipment and

9 Star Premier Local Master help our club survive – and we hope that EBU actions with the new strategy will help us further.