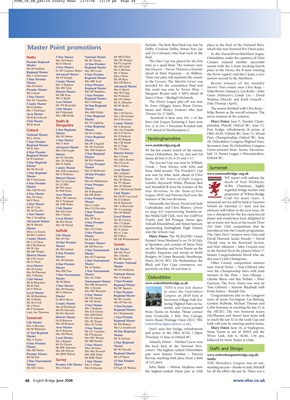 Pachabo. The Betts Bowl final was won by place in the final of the National Pairs,

and Liz Coltman) who beat Luck in the In the Dawes/Porter/Markham league,

Master 12 Star Premier time as a quali-final. The winners were

Miss J Prior These two pairs will represent the county

Mr R Kowalczyk Stamford A have won Div. 1 of the

was won by John Auld, ahead of Clive

Mrs JE Munns Kaye. In the Teams-of-Eight League, WE report with sadness the

Mrs H Oldman and Mansfield B were the winners of the SCBA Chairman, highly

Mr DCW Careswell League, DJAT and Parsons Pack were the

Cadwallader, and Chris Blainey, (photo School on Saturday 21 June and his

Ms M Pavelin Mrs EG Jones 5 Star Premier on page 44) representing Stanton-on- obituary will follow in the next issue. He

Mr MP Wright Mrs KL Pryor Sunday. Enquiries and entries to Keith in the Ranked Event for players below 1*

Notts, NG16 3PU. On Wednesdays, the this year’s Club Champions.

www.oxfordshirebridge.co.uk Gurman. The Swiss Teams was won by

Mrs A Taylor followed by Swiss Teams at Oake.

Master the local heat of the National New-

the highest-ranked Oxon pair at 10th for all the effort she put in. There was a