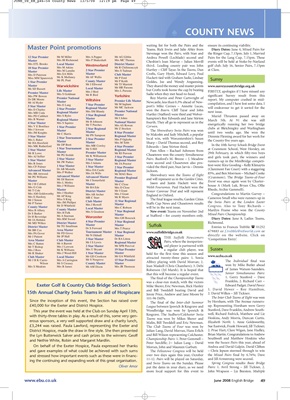 waiting list for both the Pairs and the ensure its continuing viability.

Stevenage won the Pairs, with Stan and the Ringer Cup, 7.15pm. July 1, Married

They shared the money and master points www.surreycountybridge.org.uk

Life Master Mrs J Bird Mrs L Parsons but Crofts took home the cup by beating FIRSTLY, apologies if I have missed any

Mr AJ Ryder Newcastle, less than 0.3% ahead of New- compilation, and I have lost some data. I

Regional Master Mr MC Jackson port’s Mike Cornes – Annette Lucas, will endeavour to get it sorted for the

4 Star Master Mrs S Squires fourth. They all go to represent us in the

the County five years ago.

Premier Regional and will represent us in the Garden Cities.

MR C Starr Cameron Small who were runners up in

Local Master Mrs C Robson will be in the next issue.

Dr H Beveridge Ms A Sturman Worcester at Stafford – for county members only.

Mr A Barrett Mr I S Lewis Regional Master Pairs, where the inexperien-

Roberson (Jyl Marsh). It is hoped that of James Watson-Saunders.

that this will become a regular event. Senior Simultaneous Pairs:

The final of the Championship Teams 1. Gerry Stanford – Dave

was a close-run match, with the victors Franklin, 2. Richard Carr –

Since the inception of this event, the Section has raised over The final of the Inter-club Summer by Horsham, with The Avenue runners-

£40,000 for the Exeter and District Hospice. League between Ipswich & Kesgrave and up. Representing Horsham were Gerry

This year the event was held at the Club on Sunday April 13th, Woodbridge was won by Ipswich & Stanford, Dave Franklin, Andrew South-

with thirty-three tables in play. As a result of this, some very gen- Hoskins, Andy Morris, Duncan Curtis.

Teams was won by Mikes Sherer and

£3,244 was raised. Paula Lawford, representing the Exeter and The Club Teams of Four was won by Sue Eastwick, Frank Howard, Jill Tickner;

Peter Sutcliffe; 2= Julian Lang – David won the Sussex Pairs this year, ahead of

On behalf of the Exeter Hospice, Paula expressed her thanks Morran, John and Maureen Garbutt. Andrea and David Galpin. David Clifton

and stressed how important events such as these were in financ- over two days again this year, October the Mixed Pairs final by 4.76%; Dave

11-12. Pairs will be played on Saturday, and Jill Armstrong were second.

ing the continuing and expanding work of this great organisation.

Oliver Amor put the dates in your diary, as we need Pairs: 1. Avril Strong – Jill Tickner, 2.