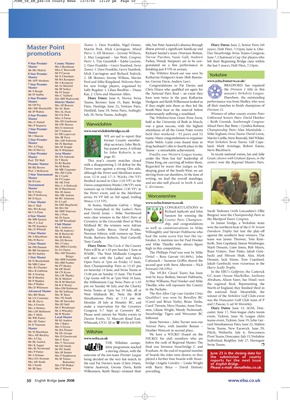 June 7, Chairman’s Cup (for players who

7 Star Premier Congratulations to Pat Davies and BRADFORD has regained

Mr SP Sellers Sally Bugden: 1. Lilian Brodbin – Diana Chris Dixon who qualified yet again for the Division 1 title in this

Mrs H Harvey has passed away. A tribute Steve Blackburn.

1 Star Premier Area Master by John Roberts is on In recent national events, Ian and Julie

Dr T Boyle under the ‘firm but fair’ leadership of

with a disappointing 2-18 defeat for the

Mr MR Carpenter Dawes team against a strong Glos side,

Prof. J McKenzie sleeping giant of the South-West, we are

Mrs JM Castle although the Porter and Markham teams

3 Star Tournament Mr J Castle stirring from our slumbers. At the time of

and are also well placed in both A and

Mr G Foley Mrs M James the Porter event, and in the Markham

Mrs F A Jeal Coventry; in the Greswolde Bowl at West In Junior bridge, a Yorkshire team

Club Master Midland BC the winners were Adrian ship, and congratulations

Mr A Blackburn Mr IR Birkby had the same score but lost the tie- against the southern heat winners. The

Dr JA Cherry Pairs will be at 1.45 pm Sunday 1 June at high in this competition.

1 Star Master will start with the Ladies’ and Men’s

Mrs BM Feather Open Pairs at 7pm on Friday 13 June, Jakub Gembecki were victorious in the

Miss B Gabbitas Mr CN Kyaw In the EBU’s Golfprint, the Catterick

Mr A Gearing 13.00 pm on Sunday 15 June. The Frank The WCBA Closed Teams has been

Mrs D Whitmore pm on Sunday 06 July, and the Charity North of England, they finished third in

Miss EM Robinson in the Pachabo.

Monday 28 July at Moseley BC, and and J Pascoe, G ad M Moverley.

Mrs A Clay Mrs C Kaye www.wcba.co.uk NICKO) for club members who are

Mrs V Newsome THE Wiltshire compe- below the rank of Regional Master. The

Mrs P Parker Mrs M Stainer a stirring climax, with the Evesham. At the end of required number

Mr A Selman outcome of the ten-team Premier League of boards the sides were drawn, so they June 23 is the closing date for

reports for the next issue