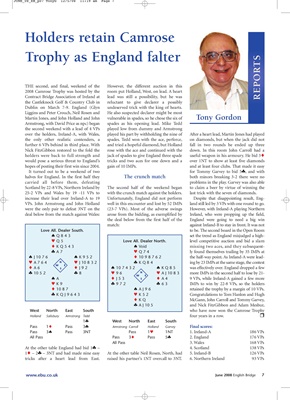 THE second, and final, weekend of the However, the different auction in this

2008 Camrose Trophy was hosted by the room put Holland, West, on lead. A heart

Contract Bridge Association of Ireland at lead was still a possibility, but he was

Dublin on March 7-9. England (Glyn undeserved trick with the king of hearts.

Liggins and Peter Crouch, Neil Rosen and He also suspected declarer might be most

Martin Jones, and John Holland and John vulnerable in spades, so he chose the six of Tony Gordon

over the holders, Ireland-A, with Wales, played his part by withholding the nine of After a heart lead, Martin Jones had played

the only other realistic contenders, a spades. Tedd won with the ace, perforce, on diamonds, but when the jack did not

further 6 VPs behind in third place. With and tried a hopeful diamond, but Holland fall in two rounds he ended up three

Nick FitzGibbon restored to the fold the rose with the ace and continued with the down. In this room John Carroll had a

holders were back to full strength and jack of spades to give England three spade useful weapon in his armoury. He bid 3♦

hopes of posting their first win since 2004. gain of 10 IMPs. and at least four clubs. That made it easy

It turned out to be a weekend of two for Tommy Garvey to bid 5♣, and with

halves for England. In the first half they The crunch match both minors breaking 3-2 there were no

carried all before them, defeating problems in the play. Garvey was also able

Scotland by 22-8 VPs, Northern Ireland by The second half of the weekend began to claim a beer by virtue of winning the

25-2 VPs and Wales by 19 -11 VPs to with the crunch match against the holders. last trick with the seven of diamonds.

increase their lead over Ireland-A to 19 Unfortunately, England did not perform Despite that disappointing result, Eng-

VPs. John Armstrong and John Holland well in this encounter and lost by 52 IMPs land still led by 3 VPs with one round to go.

were the only pair to defeat 3NT on the (23-7 VPs). Most of the adverse swings However, with Ireland-A playing Northern

deal below from the match against Wales: arose from the bidding, as exemplified by Ireland, who were propping up the field,

match: against Ireland-B to stay in front. It was not

Love All. Dealer South. to be. The second board in the Open Room

♠Q843 set the trend as England misjudged a high-