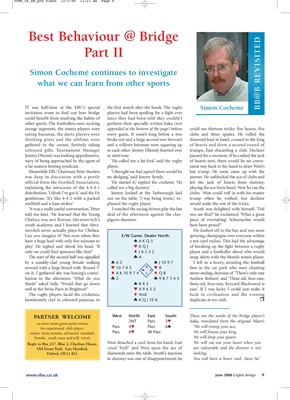 what we can learn from other sports

IT was half-time at the EBU’s special the first match after the break. The rugby Simon Cochemé

other sports. The footballers were sucking perform their specially written haka (text

orange segments, the tennis players were appended at the bottom of the page) before could see thirteen tricks: five hearts, five

eating bananas, the darts players were every game. It wasn’t long before a row clubs and three spades. He ruffed the

drinking pints and the athletes were broke out and a large second-row forward diamond lead in hand, crossed to the king

gathered in the corner, furtively taking and a willowy batsman were squaring up of hearts and drew a second round of

Jeremy Dhondy was looking apprehensive, to intervene. paused for a moment. If he cashed the jack

wary of being approached by the agent of ‘He called me a fat fool,’ said the rugby of hearts next, there would be no conve-

a far-eastern betting syndicate. player. nient way back to his hand to draw West’s

Meanwhile EBU Chairman Peter Stocken ‘I thought we had agreed there would be last trump. He soon came up with the

was deep in discussion with a portly no sledging,’ said Jeremy firmly. answer. He unblocked the ace of clubs and

official from the Football Association, ‘He started it,’ replied the cricketer. ‘He led the jack of hearts from dummy,

explaining the intricacies of the 4-4-4-1 called me a big dummy.’ playing the ace from hand. Now he ran the

distribution. ‘I think I’ve got it,’ said the FA Jeremy looked at the Yarborough laid clubs; West could ruff in with his master

gentleman, ‘It’s like 4-4-2 with a packed out on the table. ‘I was being ironic,’ ex- trump when he wished, but declarer

midfield and a lone striker.’ plained the rugby player. would make the rest of the tricks.

‘It was a really useful conversation,’ Peter I watched the racing drivers play the last South was delighted with himself. ‘Did

told me later. ‘He learned that the Young deal of the afternoon against the clay- you see that?’ he exclaimed. ‘What a great

Chelsea was not Roman Abramovitch’s pigeon shooters: piece of overtaking! Schumacher would

youth academy, and I learned that Abra- have been proud!’

movitch never actually plays for Chelsea. He dashed off to the bar and was soon

Can you imagine it? Not even when they E/W Game. Dealer North. spraying champagne over everyone within

have a huge lead with only five minutes to ♠AKQ5 a ten-yard radius. This had the advantage

play.’ He sighed and shook his head. ‘If ♥KQJ of breaking up the fight between a rugby

only we could find sponsors like that!’ ♦J6532 player and a footballer about who would

The start of the second half was signalled ♣A swap shirts with the blonde tennis player.

♥8 fans in the car park who were chanting

think?’ asked Sally. ‘Would that go down ♠843 three-nil, four-one, Keycard Blackwood is

well at the Swiss Pairs in Brighton?’ ♥A9652 easy’. If I was lucky I could just make it

The rugby players faced the cricketers, ♦ Void back to civilisation and the evening

handsomely clad in coloured pajamas, in ♣ K Q J 10 6 duplicate at my club.

for experienced club player, Pass 4♥ Pass 6♣ ‘We will trump your ace,

enjoys most systems, advanced standard. Pass 6♥ All Pass We will finesse your king,

Female, south coast and will travel. We will drop your queen.

Reply to Box 247, Blue 2, Charlton House, West detached a card from his hand, East We will cut out your heart when you

Old Estate Yard, East Hendred, cried ‘Pull!’ and West spun the ace of are vulnerable and the director is not

to dummy was one of disappointment; he You will have a heart void. Aieee-Ya.’