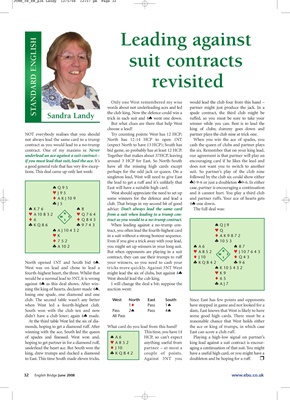 words about not underleading aces and led partner might just produce the jack. In a

the club king. Now the defence could win a spade contract, the third club might be

Sandra Landy trick in each suit and 4♠ went one down. ruffed, so you must be sure to take your

But what clues are there that help West winner while you can. Best is to lead the

choose a lead? king of clubs; dummy goes down and

NOT everybody realises that you should Try counting points: West has 12 HCP; partner plays the club nine at trick one.

not always lead the same card to a trump North has 12-14 HCP to open 1NT When you win the ace of spades, you

contract as you would lead to a no-trump (expect North to have 13 HCP); South has cash the queen of clubs and partner plays

contract. One of my maxims is: Never bid game, so probably has at least 12 HCP. the six. Remember that on your king lead,

underlead an ace against a suit contract – Together that makes about 37HCP, leaving our agreement is that partner will play an

if you must lead that suit, lead the ace. It’s around 3 HCP for East. So North-South encouraging card if he likes the lead and

tions. This deal came up only last week: perhaps for the odd jack or queen. On a suit. So partner’s play of the club nine

singleton lead, West will need to give East followed by the club six could show either

♠ Q95 East will have a suitable high card. case, partner is encouraging a continuation

♥ J95 West should appreciate the need to set up and it cannot hurt. You play a third club

♦ A K J 10 9 some winners for the defence and lead a and partner ruffs. Your ace of hearts gets

♥ K in a suit without a strong honour sequence. ♦

fourth-highest heart, the three. Whilst that might lead the six of clubs, but against 4♠ ♥K9

would be a normal lead to 3NT, it is wrong West should lead the cub king. ♦65

against 4♠ as this deal shows. After win- I will change the deal a bit; suppose the ♣AJ7

ning the king of hearts, declarer made 4♠, auction went:

losing one spade, one diamond and one

when West led a fourth-highest club. 1♦ Pass 1♠ have stopped in game and not looked for a

South won with the club ten and now Pass 2♠ Pass 4♠ slam, East knows that West is likely to have

didn’t have a club loser; again 4♠ made. All Pass some good high cards. There must be a

monds, hoping to get a diamond ruff. After What card do you lead from this hand? the ace or king of trumps, in which case

winning with the ace, South led the queen This time, you have 14 East can score a club ruff.

of spades and finessed. West won and, ♠A6 HCP, so can’t expect Playing a high-low signal on partner’s

hoping to get partner in for a diamond ruff, ♥A852 anything useful from king lead against a suit contract is encour-

underlead the heart ace. But South won the ♦ J 10 partner – at most a aging a continuation of that suit. You might

king, drew trumps and ducked a diamond ♣KQ842 couple of points. have a useful high card, or you might have a

to East. This time South made eleven tricks. Against 3NT you doubleton and be hoping for a ruff.