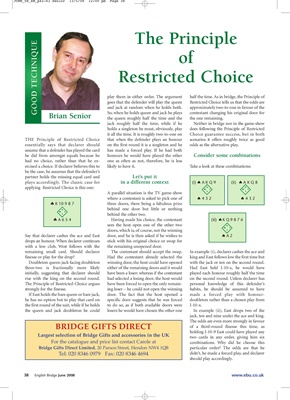 play them in either order. The argument half the time. As in bridge, the Principle of

and jack at random when he holds both. approximately two-to-one in favour of the

So, when he holds queen and jack he plays contestant changing his original door for

Brian Senior the queen roughly half the time and the the one remaining.

jack roughly half the time, while if he Neither in bridge nor in the game-show

holds a singleton he must, obviously, play does following the Principle of Restricted

it all the time. It is roughly two-to-one on Choice guarantee success, but in both

essentially says that declarer should on the first round it is a singleton and he odds as the alternative play.

assume that a defender has played the card has made a forced play. If he had both

had no choice, rather than that he ex- one as often as not, therefore, he is less

ercised a choice. If declarer believes this to likely to have it. Take a look at these combinations:

be the case, he assumes that the defender’s

partner holds the missing equal card and Let’s put it

applying Restricted Choice is this one: W

A parallel situation is the TV game-show

behind one door but little or nothing

behind the other two.

sees the host open one of the other two W

doors, which is, of course, not the winning S

Say that declarer cashes the ace and East door, and he is then asked if he wishes to ♠A2

drops an honour. When declarer continues stick with his original choice or swap for

with a low club, West follows with the the remaining unopened door.

remaining small card. Should declarer The contestant should accept the swap. In example (i), declarer cashes the ace and

finesse or play for the drop? Had the contestant already selected the king and East follows low the first time but

Doubleton queen-jack facing doubleton winning door, the host could have opened with the jack or ten on the second round.

three-two is fractionally more likely either of the remaining doors and it would Had East held J-10-x, he would have

initially, suggesting that declarer should have been a loser; whereas if the contestant played each honour roughly half the time

strongly for the finesse. ing loser – he could not open the winning habits, he should be assumed to have

If East holds the bare queen or bare jack, door. The fact that the host opened a made a forced play with honour-

the first round of the suit, while if he holds to do so, as if both available doors were J-10-x.

the queen and jack doubleton he could losers he would have chosen the other one In example (ii), East drops two of the

jack, ten and nine under the ace and king.

The odds are even more strongly in favour

BRIDGE GIFTS DIRECT of a third-round finesse this time, as

holding J-10-9 East could have played any

Largest selection of Bridge Gifts and accessories in the UK two cards in any order, giving him six