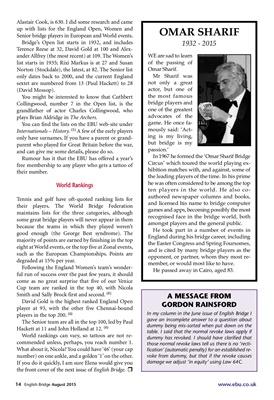 WE are sad to learn

of the pas sing of

not only a great

actor, but one of

one of the greatest

game. He once famously

but bridge is my

In 1967 he formed the 'Omar Sharif Bridge

matches with, and against, some of

the leading players of the time. In his prime

he was often considered to be among the top

ten players in the world. He also coauthored

games and apps, becoming possibly the most

recognised face in the bridge world, both

amongst players and the general public.

He took part in a number of events in

England during his bridge career, including

the Easter Congress and Spring Foursomes,

and is cited by many bridge players as the

opponent, or partner, whom they most remember,

Alastair Cook, is 630. I did some research and came

up with lists for the England Open, Women and

only dates back to 2000, and the current England

sextet are numbered from 13 (Paul Hackett) to 28

grandfather of actor Charles Collingwood, who

plays Brian Aldridge in The Archers.

You can find the lists on the EBU web-site under

Internationals - History. (5) A few of the early players

only have surnames. If you have a parent or grand parent

who played for Great Britain before the war,

and can give me some details, please do so.

Rumour has it that the EBU has offered a year's

free membership to any player who gets a tattoo of

Tennis and golf have oft-quoted ranking lists for

their players. The World Bridge Federation

maintains lists for the three categories, although

some great bridge players will never appear in them

because the teams in which they played weren't

majority of points are earned by finishing in the top

eight at World events, or the top five at Zonal events,

such as the European Championships. Points are

run of success over the past few years, it should

come as no great surprise that five of our Venice

Cup team are ranked in the top 40, with Nicola

player at 93, with the other five Chennai-bound

The Senior team are all in the top 100, led by Paul

World rankings can vary, so tattoos are not re com

mended unless, perhaps, you reach number 1.

If you do it quickly, I am sure Elena would give you

the front cover of the next issue of English Bridge. r

In my column in the June issue of English Bridge I

gave an incomplete answer to a question about

dummy being mis-sorted when put down on the

table. I said that the normal revoke laws apply if

dummy has revoked. I should have clarified that

those normal revoke laws tell us there is no 'rectification'

(automatic penalty) for an established revoke

from dummy, but that if the revoke causes