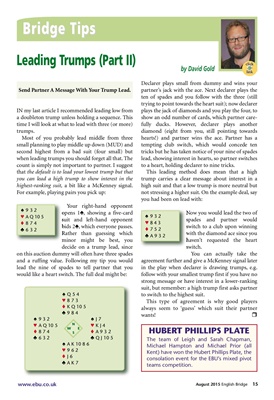 Declarer plays small from dummy and wins your

partner's jack with the ace. Next declarer plays the

ten of spades and you follow with the three (still

trying to point towards the heart suit); now declarer

plays the jack of diamonds and you play the four, to

show an odd number of cards, which partner care fully

ducks. However, declarer plays another

diamond (eight from you, still pointing towards

hearts!) and partner wins the ace. Partner has a

tricks but he has taken notice of your nine of spades

to a heart, holding declarer to nine tricks.

This leading method does mean that a high

trump carries a clear message about interest in a

high suit and that a low trump is more neutral but

not stressing a higher suit. On the example deal, say

you had been on lead with:

Now you would lead the two of

spades and partner would

switch to a club upon winning

with the diamond ace since you

You can actually take the

agreement further and give a McKenney signal later

in the play when declarer is drawing trumps, e.g.

follow with your smallest trump first if you have no

strong message or have interest in a lower-ranking

to switch to the highest suit.

This type of agreement is why good players

always seem to 'guess' which suit their partner

Send Partner A Message With Your Trump Lead.

IN my last article I recommended leading low from

a doubleton trump unless holding a sequence. This

Most of you probably lead middle from three

small planning to play middle up down (MUD) and

second highest from a bad suit (four small) but

when leading trumps you should forget all that. The

count is simply not important to partner. I suggest

that the default is to lead your lowest trump but that

you can lead a high trump to show interest in the

For example, playing pairs you pick up:

bids 2´, which everyone passes.

Rather than guessing which

decide on a trump lead, since

on this auction dummy will often have three spades

and a ruffing value. Following my tip you would

lead the nine of spades to tell partner that you

The team of Leigh and Sarah Chapman,

Michael Hampton and Michael Prior (all

Kent) have won the Hubert Phillips Plate, the