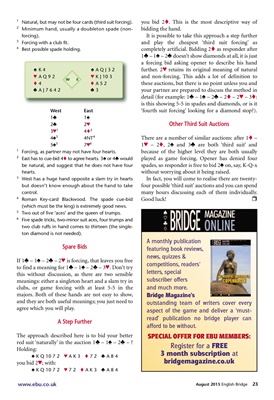 1 Natural, but may not be four cards (third suit forcing).

3 Forcing with a club fit.

1 Forcing, as partner may not have four hearts.

be natural, and suggest that he does not have four

but doesn't know enough about the hand to take

(which must be the king) is extremely good news.

5 Two out of five 'aces' and the queen of trumps.

two club ruffs in hand comes to thirteen (the singleton

diamond is not needed).

this without discussion, as there are two sensible

meanings: either a singleton heart and a slam try in

clubs, or game forcing with at least 5-5 in the

majors. Both of these hands are not easy to show,

and they are both useful meanings; you just need to

agree which you will play.

The approach described here is to bid your better

you bid 2t. This is the most descriptive way of

It is possible to take this approach a step further

and play the cheapest 'third suit forcing' as

a forcing bid asking opener to describe his hand

and non-forcing. This adds a lot of definition to

these auctions, but there is no point unless you and

your partner are prepared to discuss the method in

is this showing 5-5 in spades and diamonds, or is it

There are a number of similar auctions: after 1t -

because of the higher level they are both usually

without worrying about it being raised.

In fact, you will come to realise there are twentyfour

possible 'third suit' auctions and you can spend

many hours discussing each of them individually.

outstanding team of writers cover every

aspect of the game and deliver a 'mustread'

publication no bridge player can

afford to be without.

Register for a FREE