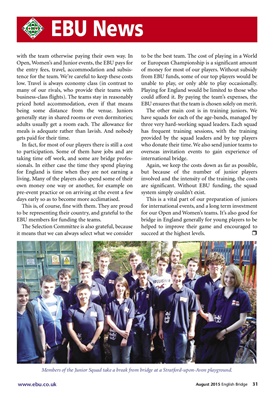 with the team otherwise paying their own way. In

Open, Women's and Junior events, the EBU pays for

for the team. We're careful to keep these costs

low. Travel is always economy class (in contrast to

many of our rivals, who provide their teams with

priced hotel accommodation, even if that means

being some distance from the venue. Juniors

generally stay in shared rooms or even dormitories;

adults usually get a room each. The allowance for

meals is ade quate rather than lavish. And nobody

gets paid for their time.

In fact, for most of our players there is still a cost

to participation. Some of them have jobs and are

taking time off work, and some are bridge profes sionals.

In either case the time they spend playing

for England is time when they are not earning a

living. Many of the players also spend some of their

own money one way or another, for example on

pre-event practice or on arriving at the event a few

days early so as to become more acclimatised.

This is, of course, fine with them. They are proud

to be representing their country, and grateful to the

EBU members for funding the teams.

The Selection Committee is also grateful, because

it means that we can always select what we consider

to be the best team. The cost of playing in a World

or European Championship is a significant amount

of money for most of our players. Without subsidy

from EBU funds, some of our top players would be

Playing for England would be limited to those who

could afford it. By paying the team's expenses, the

EBU ensures that the team is chosen solely on merit.

The other main cost is in training juniors. We

have squads for each of the age-bands, managed by

has frequent training sessions, with the training

provided by the squad leaders and by top players

who donate their time. We also send junior teams to

Again, we keep the costs down as far as possible,

but because of the number of junior players

involved and the intensity of the training, the costs

are significant. Without EBU funding, the squad

This is a vital part of our preparation of juniors

for international events, and a long term investment

for our Open and Women's teams. It's also good for

bridge in England generally for young players to be

helped to improve their game and encouraged to

succeed at the highest levels. r

Members of the Junior Squad take a break from bridge at a Stratford-upon-Avon playground.