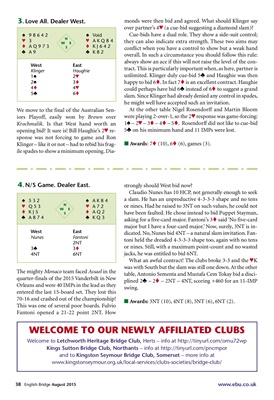 3.love All. Dealer West. monds were then bid and agreed. What should Klinger say

over partner's 4™ (a cue-bid suggesting a diamond slam)?

Cue-bids have a dual role. They show a side-suit control;

they can also indicate extra strength. These two aims may

overall. In such a circumstance you should follow this rule:

always show an ace if this will not raise the level of the contract.

This is particularly important when, as here, partner is

unlimited. Klinger duly cue-bid 5® and Haughie was then

happy to bid 6t. In fact 7t is an excellent contract. Haughie

slam. Since Klinger had already denied any control in spades,

At the other table Nigel Rosendorff and Martin Bloom

were playing 2-over-1, so the 2™ response was game-forcing:

Claudio Nunes has 10 HCP, not generally enough to seek

or nines. Had he raised to 3NT on such values, he could not

have been faulted. He chose instead to bid Puppet Stayman,

asking for a five-card major. Fantoni's 3t said 'No five-card

major but I have a four-card major.' Now, surely, 3NT is indicated.

or nines. Still, with a maximum point-count and no wasted

jacks, he was entitled to bid 6NT.

What an awful contract! The clubs broke 3-3 and the ™K

was with South but the slam was still one down. At the other

We move to the final of the Australian Seniors

Playoff, easily won by Brown over

Krochmalik. Is that West hand worth an

opening bid? It sure is! Bill Haughie's 2™ response

was not forcing to game and Ron

Klinger - like it or not - had to rebid his fragile

spades to show a minimum opening. Dia The

quarter-finals of the 2015 Vanderbilt in New

Orleans and were 40 IMPs in the lead as they

entered the last 15-board set. They lost this

70-16 and crashed out of the championship!

This was one of several poor boards. Fulvio

WELCOME TO OUR NEWLY AFFILIATED CLUBS

and to Kingston Seymour Bridge Club, Somerset - more info at