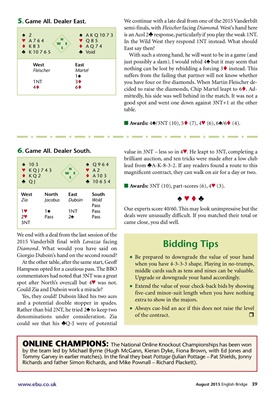 is an Acol 2® response, particularly if you play the weak 1NT.

In the Wild West they respond 1NT instead. What should

With such a strong hand, he will want to be in a game (and

just possibly a slam). I would rebid 4´ but it may seem that

nothing can be lost by rebidding a forcing 3t instead. This

suffers from the failing that partner will not know whether

you have four or five diamonds. When Martin Fleischer decided

to raise the diamonds, Chip Martel leapt to 6t. Admittedly,

his side was well behind in the match. It was not a

We end with a deal from the last session of the

Dia mond. What would you have said on

Giorgio Duboin's hand on the second round?

At the other table, after the same start, Geoff

Hampson opted for a cautious pass. The BBO

commentators had noted that 3NT was a great

spot after North's overcall but 4™ was not.

Could Zia and Duboin work a miracle?

Yes, they could! Duboin liked his two aces

and a potential double stopper in spades.

Rather than bid 2NT, he tried 2´ to keep two

could see that his ®Q-J were of potential

brilliant auction, and ten tricks were made after a low club

magnificent contract, they can walk on air for a day or two.

Our experts score 40/60. This may look unimpressive but the

deals were unusually difficult. If you matched their total or

came close, you did well.

• Be prepared to downgrade the value of your hand

middle cards such as tens and nines can be valuable.

Upgrade or downgrade your hand accordingly.

• Extend the value of your check-back bids by showing

five-card minor-suit length when you have nothing

extra to show in the majors.

of the contract. r

ONLINE CHAMPIONS: The National Online Knockout Championships has been won