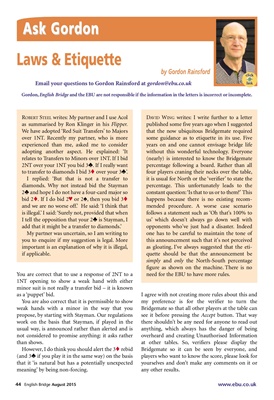 ROBERT STEEL writes: My partner and I use Acol

as summarised by Ron Klinger in his Flipper.

We have adopted 'Red Suit Transfers' to Majors

over 1NT. Recently my partner, who is more

experienced than me, asked me to consider

adopting another aspect. He explained: 'It

relates to Transfers to Minors over 1NT. If I bid

to transfer to diamonds I bid 3t over your 3®'.

I replied: 'But that is not a transfer to

diamonds. Why not instead bid the Stayman

and we are no worse off.' He said: 'I think that

is illegal.' I said: 'Surely not, provided that when

I tell the opposition that your 2® is Stayman, I

add that it might be a transfer to diamonds.'

My partner was uncertain, so I am writing to

you to enquire if my suggestion is legal. More

important is an explanation of why it is illegal,

1NT opening to show a weak hand with either

minor suit is not really a transfer bid - it is known

You are also correct that it is permissible to show

weak hands with a minor in the way that you

propose, by starting with Stayman. Our regulations

work on the basis that Stayman, if played in the

usual way, is announced rather than alerted and is

not considered to promise anything: it asks rather

However, I do think you should alert the 3t rebid

that it 'is natural but has a potentially unexpected

meaning' by being non-forcing.

DAVID WING writes: I write further to a letter

published some five years ago when I suggested

that the now ubiquitous Bridgemate required

some guidance as to etiquette in its use. Five

years on and one cannot envisage bridge life

without this wonderful techno logy. Everyone

percentage following a board. Rather than all

four players craning their necks over the table,

it is usual for North or the 'verifier' to state the

percentage. This unfortunately leads to the

con stant question: 'Is that to us or to them?'�This

happens because there is no existing recom mended

us' which doesn't always go down well with

one has to be careful to maintain the tone of

this announcement such that it's not perceived

as gloating.�I've always suggested that the eti quette

should be that the announcement be

simply and only the North-South percentage

figure as shown on the machine.�There is no

need for the EBU to have more rules.

I agree with not creating more rules about this and

my preference is for the verifier to turn the

Bridgemate so that all other players at the table can

see it before pressing the Accept button. That way

there shouldn't be any need for anyone to read out

anything, which always has the danger of being

at other tables. So, verifiers please display the

Bridgemate so it can be seen by everyone, and

players who want to know the score, please look for

yourselves and don't make any comments on it or

Gordon, English Bridge and the EBU are not responsible if the information in the letters is incorrect or incomplete.