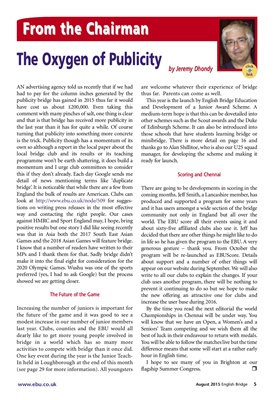 AN advertising agency told us recently that if we had

had to pay for the column inches generated by the

publicity bridge has gained in 2015 thus far it would

comment with many pinches of salt, one thing is clear

and that is that bridge has received more publicity in

the last year than it has for quite a while. Of course

turning that publicity into something more concrete

is the trick. Publicity though has a momentum of its

own so although a report in the local paper about the

local bridge club and its results or its teaching

programme won't be earth shattering, it does build a

momentum and I urge club committees to consider

this if they don't already. Each day Google sends me

bridge'. It is noticeable that while there are a few from

England the bulk of results are American. Clubs can

look at http://www.ebu.co.uk/node/509 for sugges tions

on writing press releases in the most effective

way and contacting the right people. Our cases

against HMRC and Sport England may, I hope, bring

positive results but one story I did like seeing recently

was that in Asia both the 2017 South East Asian

Games and the 2018 Asian Games will feature bridge.

I know that a number of readers have written to their

MPs and I thank them for that. Sadly bridge didn't

make it into the final eight for consideration for the

2020 Olympic Games. Wushu was one of the sports

preferred (yes, I had to ask Google) but the process

showed we are getting closer.

The Future of the Game

Increasing the number of juniors is important for

modest increase in our number of junior members

last year. Clubs, counties and the EBU would all

dearly like to get more young people involved in

bridge in a world which has so many more

activities to compete with bridge than it once did.

One key event during the year is the Junior TeachIn

held in Loughborough at the end of this month

are welcome whatever their experience of bridge

This year is the launch by English Bridge Education

and Development of a Junior Award Scheme. A

medium-term hope is that this can be dovetailed into

other schemes such as the Scout awards and the Duke

of Edinburgh Scheme. It can also be introduced into

those schools that have students learning bridge or

minibridge. There is more detail on page 16 and

thanks go to Alan Shillitoe, who is also our U25 squad

manager, for developing the scheme and making it

There are going to be developments in scoring in the

produced and supported a program for some years

and it has users amongst a wide section of the bridge

community not only in England but all over the

world. The EBU score all their events using it and

about sixty-five affiliated clubs also use it. Jeff has

in life so he has given the program to the EBU. A very

generous gesture - thank you. From October the

program will be re-launched as EBUScore. Details

about support and a number of other things will

appear on our website during September. We will also

write to all our clubs to explain the changes. If your

club uses another program, there will be nothing to

the new offering an attractive one for clubs and

increase the user base during 2016.

By the time you read the next editorial the world

Championships in Chennai will be under way. You

will know that we have an Open, a Women's and a

Seniors' Team competing and we wish them all the

best of luck in their endeavour to return with medals.

difference means that some will start at a rather early

I hope to see many of you in Brighton at our

The Oxygen of Publicity by Jeremy Dhondy