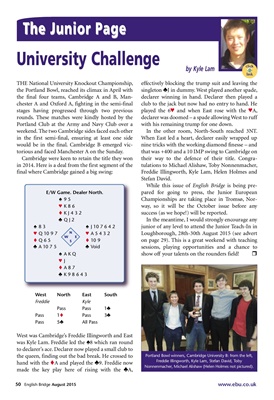 the Portland Bowl, reached its climax in April with

the final four teams, Cambridge A and B, Man chester

A and Oxford A, fighting in the semi-final

stages having progressed through two previous

rounds. These matches were kindly hosted by the

Portland Club at the Army and Navy Club over a

weekend. The two Cambridge sides faced each other

in the first semi-final, ensuring at least one side

would be in the final. Cambridge B emerged vic torious

and faced Manchester A on the Sunday.

Cambridge were keen to retain the title they won

was Kyle Lam. Freddie led the ´8 which ran round

to declarer's ace. Declarer now played a small club to

the queen, finding out the bad break. He crossed to

hand with the tA and played the ®9. Freddie now

made the key play here of rising with the ®A,

effectively blocking the trump suit and leaving the

declarer winning in hand. Declarer then played a

club to the jack but now had no entry to hand. He

played the 6™ and when East rose with the ™A,

declarer was doomed - a spade allowing West to ruff

with his remaining trump for one down.

In the other room, North-South reached 3NT.

When East led a heart, declarer easily wrapped up

nine tricks with the working diamond finesse - and

their way to the defence of their title. Congra tulations

While this issue of English Bridge is being pre pared

for going to press, the Junior European

Championships are taking place in Tromsø, Nor way,

so it will be the October issue before any

success (as we hope!) will be reported.

In the meantime, I would strongly encourage any

junior of any level to attend the Junior Teach-In in

on page 29). This is a great weekend with teaching

sessions, playing opportunities and a chance to

show off your talents on the rounders field! r

Portland Bowl winners, Cambridge University B: from the left,