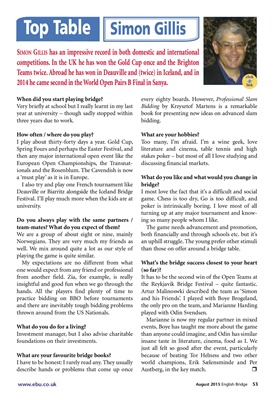 Very briefly at school but I really learnt in my last

year at university - though sadly stopped within

three years due to work.

I play about thirty-forty days a year. Gold Cup,

Spring Fours and perhaps the Easter Festival, and

als and the Rosenblum. The Cavendish is now

I also try and play one French tournament like

Deauville or Biarritz alongside the Iceland Bridge

Festival. I'll play much more when the kids are at

Do you always play with the same partners /

team-mates? What do you expect of them?

We are a group of about eight or nine, mainly

Norwegians. They are very much my friends as

well. We mix around quite a lot as our style of

playing the game is quite similar.

My expectations are no different from what

one would expect from any friend or professional

from another field. Zia, for example, is really

insightful and good fun when we go through the

hands. All the players find plenty of time to

practice bidding on BBO before tournaments

and there are inevitably tough bidding problems

thrown around from the US Nationals.

foundations on their investments.

I have to be honest: I rarely read any. They usually

describe hands or problems that come up once

every eighty boards. However, Professional Slam

Bidding by Krzysztof Martens is a remarkable

stakes poker - but most of all I love studying and

I most love the fact that it's a difficult and social

game. Chess is too dry, Go is too difficult, and

poker is intrinsically boring. I love most of all

turning up at any major tournament and know ing

The game needs advancement and promotion,

both financially and through schools etc. but it's

an uphill struggle. The young prefer other stimuli

than those on offer around a bridge table.

What's the bridge success closest to your heart

the Reykjavik Bridge Festival - quite fantastic.

and his Friends'. I played with Boye Brogeland,

the only pro on the team, and Marianne Harding

Marianne is now my regular partner in mixed

events, Boye has taught me more about the game

than anyone could imagine, and Odin has similar

insane taste in literature, cinema, food as I. We

just all felt so good after the event, particularly

because of beating Tor Helness and two other

world champions, Erik Sælensminde and Per

Austberg, in the key match. r

SIMON GILLIS has an impressive record in both domestic and international

competitions. In the UK he has won the Gold Cup once and the Brighton

Teams twice. Abroad he has won in Deauville and (twice) in Iceland, and in

2014 he came second in the World Open Pairs B Final in Sanya.