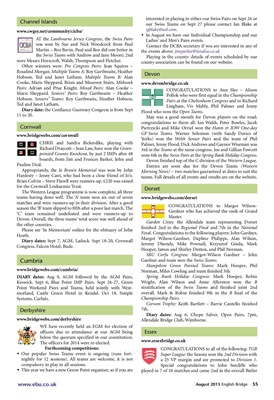 AT the Lambourne Jersey Congress, the Swiss Pairs

was won by Sue and Nick Woodcock from Paul

Martin - Roz Bavin. Paul and Roz did one better in

the Swiss Teams with Andrew and Jane Moore; 2nd

Diary date: the Confiance Guernsey Congress is from Sept

CHRIS and Sandra Bickerdike, playing with

County Knockout, by just 2 IMPs after 48

boards, from Jim and Frances Barker, John and

Appropriately, the Jo Brown Memorial was won by John

Hardesty - Jenny Cant, who had been a close friend of Jo's.

for the Cornwall Leukaemia Trust.

The Western League programme is now complete, all three

teams having done well. The 'A' team won six out of seven

matches and were runners-up in their division. After a good

season the 'B' team slipped to fifth after a poor last match. The

'C' team remained undefeated and were runners-up to

Devon. Overall, the three teams' total score was well ahead of

Please see 'In Memoriam' online for the obituary of John

WE have recently held an EGM for election of

officers due to attendance at our AGM being

below the quorum specified in our constitution.

The officers for 2014 were re-elected.

for 12 sessions). All teams are welcome, it is not

compulsory to play in all sessions.

• This year we have a new Green Poinjimparker@totalise.co.ukre

our Swiss Teams on Sept 27 please contact Ian Blake at

• In August we have our Individual Championship and our

Playing in the county: details of events scheduled by our

Pollok who were first equal in the Champion ship

Pairs at the Cheltenham Congress and to Richard

Flood who won the Open Teams.

May was a good month for Devon players on the road;

congratulations to them all. Ian Walsh, Peter Bowles, Jacek

Yorks) won the Welsh Senior Pairs and the team of Phil

3rd in the Teams at the same congress. Joe and Gillian Fawcett

were 6th in the Swiss Pairs at the Spring Bank Holiday Congress.

Devon finished top of the C division of the Western League.

Entries are soon due for the Devon Teams (Western

Morning News) - two matches guaranteed at dates to suit the

teams. Full details of all events and results are on the website.

who has achieved the rank of Grand

finished 2nd in the Regional Final and 7th in the National

Wright, Alan Wilson and Anne Allerston won the B

stratification of the Swiss Teams and finished joint 2nd

overall. Mark & Robin finished 9th in the B final of the

CONGRATULATIONS to all of the following: TGR

Super League: the Saxons won the 2nd Division with

a 25 VP margin and are promoted to Division 1.

Special congratulations to John Sutcliffe who