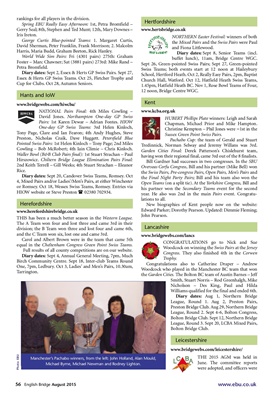 rankings for all players in the division.

4, Mixed Pairs and/or Ladies'/Men's Pairs, at either Winchester

THIS has been a much better season in the Western League.

division; the B Team won three and lost four and came 6th,

and the C Team won six, lost one and came 3rd.

Carol and Albert Brown were in the team that came 5th

NORTHERN Easter Festival: winners of both

the Mixed Pairs and the Swiss Pairs were Paul

Swiss Teams; both events start at 12 noon at Haileybury

Chapman, Michael Prior and Mike Hampton.

Christine Kempton - Phil Jones were =1st in the

Pachabo Cup: the team of Gerald and Stuart

having won their regional final, came 3rd out of the 8 finalists.

Bill Gardner had successes in two congresses. In the SBU

the Final Night Party Pairs; Bill and his team also won the

Open Teams (on a split tie). At the Yorkshire Congress, Bill and

his partner won the Secondary Teams event for the second

year. He also was 2nd in the main Pairs event. Congra tu lations

New biographies of Kent people now on the website:

CONGRATULATIONS go to Nick and Sue

Woodcock on winning the Swiss Pairs at the Jersey

Congress. They also finished 4th in the Corwen

Woodcock who played in the Manchester BC team that won

the Garden Cities. The Bolton BC team of Austin Barnes - Jeff

Williams qualified for the final and ended 6th.

were adopted, and officers were