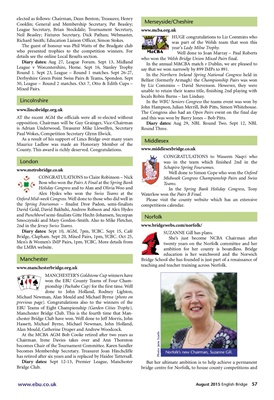 The guest of honour was Phil Watts of the Bradgate club

who presented trophies to the competition winners. For

AT the recent AGM the officials were all re-elected without

Maurice Ladlow was made an Honorary Member of the

Boss who won the Pairs A Final at the Spring Bank

Holiday Congress and to Alan and Olivia Woo and

Alex Hydes who won the Swiss Teams at the

Oxford Mid-week Congress. Well done to those who did well in

2nd in the Jersey Swiss Teams.

previous page). Congratulations also to the winners of the

Manchester Bridge Club. This is the fourth time that Man chester

At the MCBA AGM Bob Cooke retired after two years as

has retired after six years and is replaced by Haidee Tattersall.

HUGE congratulations to Liz Commins who

was part of the Welsh team that won this

In the annual M&CBA match v Dublin, we are pleased to

In the Northern Ireland Spring National Congress held in

by Liz Commins - David Stevenson. However, they were

unable to retain their teams title, finishing 2nd playing with

In the WBU Seniors Congress the teams event was won by

and this was won by Barry Jones - Bob Pitts.

CONGRATULATIONS to Waseem Naqvi who

was in the team which finished 2nd in the

Well done to Simon Cope who won the Oxford

Waterlow won the Pairs B Final.

Please visit the county website which has an extensive

twenty years on the Norfolk committee and her

ambition for her county is boundless. Bridge

education is her watchword and the Norwich

teaching and teacher training across Norfolk.

But her ultimate ambition is to help achieve a permanent

bridge centre for Norfolk, to house county competitions and