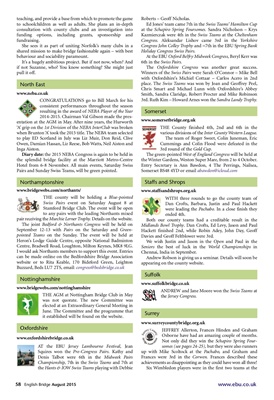 teaching, and provide a base from which to promote the game

to schoolchildren as well as adults. She plans an in-depth

consultation with county clubs and an investigation into

funding options, including grants, sponsorship and

It's a hugely ambitious project. But if not now, when? And

if not Suzanne, who? You know something? She might just

CONGRATULATIONS go to Bill March for his

consistent performances throughout the season

resulting in the award of NEBA Player of the Year

tation at the AGM in May. After nine years, the Hurworth

when Brunton 'A' took the 2015 title. The NEBA team selected

Diary date: the 2015 NEBA Congress is again to be held in

the splendid bridge facility at the Marriott Metro-Centre

Pairs and Sunday Swiss Teams, will be green pointed.

THE county will be holding a Blue-pointed

Stamford Bridge Club. The event will be open

to any pairs with the leading Northants mixed

pair receiving the Murchie Lerner Trophy. Details on the website.

The joint Bedford & Northants Congress will be held on

September 12-13 with Pairs on the Saturday and Greenpointed

Teams on the Sunday. The event will be held at

I would ask Northants members tcongress@bedsbridge.co.ukries

can be made online on the Bedfordshire Bridge Association

THE AGM at Nottingham Bridge Club in May

was not quorate. The new Committee was

elected at an Extraordinary General Meeting in

June. The Committee and the programme that

Denis Talbot were 6th in the Midweek Pairs

Championship, 7th in the Swiss Teams and 7th at

Kazmierczak were 4th in the Swiss Teams at the Cheltenham

At the EBU Oxford Belfry Midweek Congress, Beryl Kerr was

6th in the Swiss Pairs.

The Oxfordshire Congress was another great success.

Winners of the Swiss Pairs were Sarah O'Connor - Mike Bell

place. The Swiss Teams was won by Joan and Geoffrey Peel,

THE County finished 4th, 2nd and 6th in the

Cummings and Colin Flood were defeated in the

3rd round of the Gold Cup.

The green-pointed West of England Congress will be held at

the Winter Gardens, Weston Super Mare, from 2 to 4 October.

WITH three rounds to go the county team of

were leading the Pachabo. In a close finish they

Both our county teams had a creditable result in the

Davies and Geoff Feltblower were 3rd.

Seniors the best of luck in the World Championships in

Andrew Robson is giving us a seminar. Details will soon be

ANDREW and Jane Moore won the Swiss Teams at

Osborne have had an amazing couple of months.

Not only did they win the Schapiro Spring Four somes

up with Mike Scoltock at the Pachabo, and Graham and

Frances were 3rd in the Corwen. Frances described these

achievements as disappointing as they could have won all three!

Six Wimbledon players were in the first two teams at the