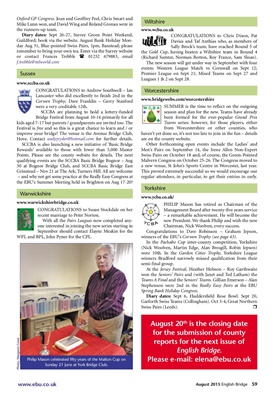 Mike Lunn won, and David Wing and Roland Gronau were in

remember to bring your own tea. Enter via the Surrey website

Lancaster who did excellently to finish 2nd in the

were a very creditable 12th.

SCCBA are planning to hold a lottery-funded

Bridge Festival from August 10-14 primarily fandyjryder@hotmail.com 7-17 but parents / grandparents are invited too. The

improve your bridge! The venue is the Avenue Bridge Club,

SCCBA is also launching a new initiative of 'Basic Bridge

Rewards' available to those with fewer than 5,000 Master

Points. Please see the county website for details. The next

Grinstead - Nov 21 at The Ark, Turners Hill. All are welcome

the EBU's Summer Meeting held in Brighton on Aug 17-20?

CONGRATULATIONS to Susan Stockdale on her

With all the Pairs Leagues now completed any one

WPL and BPL, John Pyner for the CPL.

Davies and Taf Anthias who, as members of

Sally Brock's team, have reached Round 5 of

the Gold Cup, having beaten a Wiltshire team in Round 4

The new season will get under way in September with four

Premier League on Sept 21; Mixed Teams on Sept 27 and

SUMMER is the time to reflect on the outgoing

season and plan for the new. Teams have already

been formed for the ever-popular Grand Prix

Teams series: however, for those players, either

from Worcestershire or other counties, who

haven't yet done so, it's not too late to join in the fun - details

Other forthcoming open events include the Ladies' and

Swiss Pairs on October 18 and, of course, the Green-Pointed

Malvern Congress on October 25-26. The Congress moved to

This proved extremely successful so we would encourage our

regular attendees, in particular, to get their entries in early.

PHILIP Mason has retired as Chairman of the

Management Board after twenty-five years service

- a remarkable achievement. He will become the

new President. We thank Philip and wish the new

were 10th. In the Garden Cities Trophy, Yorkshire League

won the Seniors' Pairs and (with Janet and Ted Latham) the

Teams A Final and the Seniors' Teams. Gillian Emerson - Alan

Stephenson were 2nd in the Really Easy Pairs at the EBU

August 20th is the closing date

for the submission of county

reports for the next issue of

Philip Mason celebrated fifty years of the Malton Cup on