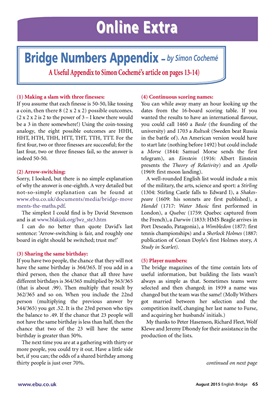 (1) Making a slam with three finesses:

If you assume that each finesse is 50-50, like tossing

be a 3 in there somewhere!) Using the coin-tossing

first four, two or three finesses are successful; for the

last four, two or three finesses fail, so the answer is

Sorry, I looked, but there is no simple explanation

of why the answer is one-eighth. A very detailed but

not-so-simple explanation can be found at

The simplest I could find is by David Stevenson

I can do no better than quote David's last

sentence: 'Arrow-switching is fair, and roughly one

board in eight should be switched; trust me!'

If you have two people, the chance that they will not

third person, then the chance that all three have

(that is about .99). Then multiply that result by

person (multiplying the previous answer by

not have the same birthday is less than half, then the

chance that two of the 23 will have the same

birthday is greater than 50%.

The next time you are at a gathering with thirty or

more people, you could try it out. Have a little side

bet, if you can; the odds of a shared birthday among

thirty people is just over 70%.

You can while away many an hour looking up the

dates from the 16-board scoring table. If you

wanted the results to have an international flavour,

you could call 1460 a Basle (the founding of the

in the battle of). An American version would have

to start late (nothing before 1492) but could include

presents the Theory of Relativity) and an Apollo

of the military, the arts, science and sport: a Stirling

(1304: Stirling Castle falls to Edward I), a Shakes peare

tennis championships) and a Sherlock Holmes (1887:

The bridge magazines of the time contain lots of

always as simple as that. Sometimes teams were

selected and then changed; in 1939 a name was

changed but the team was the same! (Molly Withers

got married between her selection and the

competition itself, changing her last name to Furse,

and acquiring her husbands' initials.)

My thanks to Peter Hasenson, Richard Fleet, Wolf

Klewe and Jeremy Dhondy for their assistance in the

production of the lists.

continued on next page

A Useful Appendix to Simon Cochemé's article on pages 13-14)