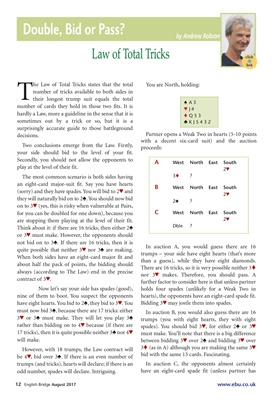 he Law of Total Tricks states that the total

number of tricks available to both sides in

number of cards they hold in those two fits. It is

hardly a Law, more a guideline in the sense that it is

sometimes out by a trick or so, but it is a

surprisingly accurate guide to those battleground

your side should bid to the level of your fit.

Secondly, you should not allow the opponents to

play at the level of their fit.

The most common scenario is both sides having

an eight-card major-suit fit. Say you have hearts

(sorry) and they have spades. You will bid to 2™ and

they will naturally bid on to 2´. You should now bid

on to 3™ (yes, this is risky when vulnerable at Pairs,

for you can be doubled for one down), because you

are stopping them playing at the level of their fit.

Think about it: if there are 16 tricks, then either 2´

or 3™ must make. However, the opponents should

quite possible that neither 3™ nor 3´ are making.

When both sides have an eight-card major fit and

about half the pack of points, the bidding should

always (according to The Law) end in the precise

Now let's say your side has spades (good),

nine of them to boot. You suspect the opponents

must now bid 3´, because there are 17 tricks: either

rather than bidding on to 4™ because (if there are

However, with 18 trumps, the Law contract will

trumps (and tricks), hearts will declare; if there is an

You are North, holding:

with a decent six-card suit) and the auction

In auction A, you would guess there are 16

trumps - your side have eight hearts (that's more

than a guess), while they have eight diamonds.

There are 16 tricks, so it is very possible neither 3t

nor 3™ makes. Therefore, you should pass. A

further factor to consider here is that unless partner

holds four spades (unlikely for a Weak Two in

hearts), the opponents have an eight-card spade fit.

Bidding 3™ may jostle them into spades.

In auction B, you would also guess there are 16

must make. You'll note that there is a big difference

bid with the same 13 cards. Fascinating.

have an eight-card spade fit (unless partner has