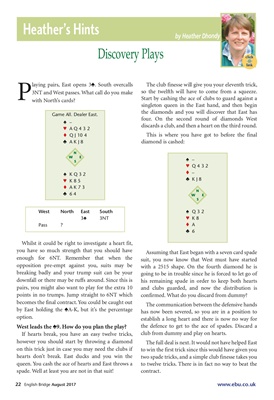 3NT and West passes. What call do you make

The club finesse will give you your eleventh trick,

so the twelfth will have to come from a squeeze.

Start by cashing the ace of clubs to guard against a

singleton queen in the East hand, and then begin

the diamonds and you will discover that East has

four. On the second round of diamonds West

discards a club, and then a heart on the third round.

This is where you have got to before the final

Whilst it could be right to investigate a heart fit,

you have so much strength that you should have

enough for 6NT. Remember that when the

opposition pre-empt against you, suits may be

breaking badly and your trump suit can be your

downfall or there may be ruffs around. Since this is

pairs, you might also want to play for the extra 10

points in no trumps. Jump straight to 6NT which

becomes the final contract. You could be caught out

by East holding the ´A-K, but it's the percentage

West leads the ´9. How do you plan the play?

If hearts break, you have an easy twelve tricks,

however you should start by throwing a diamond

hearts don't break. East ducks and you win the

queen. You cash the ace of hearts and East throws a

spade. Well at least you are not in that suit!

Assuming that East began with a seven card spade

suit, you now know that West must have started

his remaining spade in order to keep both hearts

and clubs guarded, and now the distribution is

confirmed. What do you discard from dummy?

The communication between the defensive hands

has now been severed, so you are in a position to

establish a long heart and there is now no way for

the defence to get to the ace of spades. Discard a

club from dummy and play on hearts.

The full deal is next. It would not have helped East

to win the first trick since this would have given you

two spade tricks, and a simple club finesse takes you

to twelve tricks. There is in fact no way to beat the