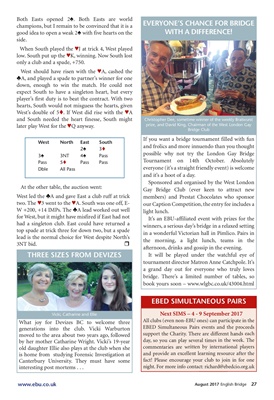 champions, but I remain to be convinced that it is a

When South played the ™J at trick 4, West played

West should have risen with the ™A, cashed the

®A, and played a spade to partner's winner for one

down, enough to win the match. He could not

expect South to have a singleton heart, but every

player's first duty is to beat the contract. With two

hearts, South would not misguess the hearts, given

West's double of 5t. If West did rise with the ™A

At the other table, the auction went:

for West, but it might have misfired if East had not

had a singleton club. East could have returned a

top spade at trick three for down two, but a spade

lead is the normal choice for West despite North's

What joy for Devizes BC to welcome three

generations into the club. Vicki Warburton

moved to the area about two years ago, followed

old daughter Ellie also plays at the club when she

is home from studying Forensic Investigation at

Canterbury University. They must have some

If you want a bridge tournament filled with fun

and frolics and more innuendo than you thought

possible why not try the London Gay Bridge

everyone (it's a straight friendly event) is welcome

Sponsored and organised by the West London

members) and Prestat Chocolates who sponsor

our Caption Competition, the entry fee includes a

It's an EBU-affiliated event with prizes for the

winners, a serious day's bridge in a relaxed setting

in a wonderful Victorian hall in Pimlico. Pairs in

the morning, a light lunch, teams in the

afternoon, drinks and gossip in the evening.

It will be played under the watchful eye of

a grand day out for everyone who truly loves

bridge. There's a limited number of tables, so

prize, and David King, Chairman of the West London Gay

All clubs (even non-EBU ones) can participate in the

support the Charity. There are different hands each

day, so you can play several times in the week. The

and provide an excellent learning resource after the

fact! Please encourage your club to join in for one