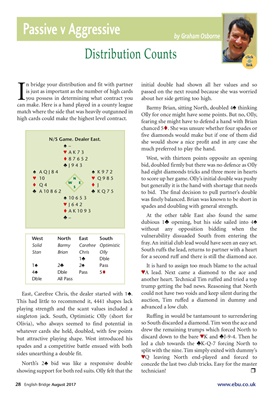 n bridge your distribution and fit with partner

is just as important as the number of high cards

you possess in determining what contract you

can make. Here is a hand played in a county league

match where the side that was heavily outgunned in

initial double had shown all her values and so

passed on the next round because she was worried

about her side getting too high.

Olly for once might have some points. But no, Olly,

fearing she might have to defend a hand with Brian

chanced 5t. She was unsure whether four spades or

five diamonds would make but if one of them did

she would show a nice profit and in any case she

much preferred to play the hand.

West, with thirteen points opposite an opening

bid, doubled firmly but there was no defence as Olly

had eight diamonds tricks and three more in hearts

to score up her game. Olly's initial double was pushy

but generally it is the hand with shortage that needs

to bid. The final decision to pull partner's double

was finely balanced. Brian was known to be short in

spades and doubling with general strength.

At the other table East also found the same

dubious 1® opening, but his side sailed into 4´

without any opposition bidding when the

vulnerability dissuaded South from entering the

fray. An initial club lead would have seen an easy set.

South ruffs the lead, returns to partner with a heart

for a second ruff and there is still the diamond ace.

It is hard to assign too much blame to the actual

™A lead. Next came a diamond to the ace and

another heart. Technical Tim ruffed and tried a top

trump getting the bad news. Reasoning that North

could not have two voids and keep silent during the

auction, Tim ruffed a diamond in dummy and

Ruffing in would be tantamount to surrendering

so South discarded a diamond. Tim won the ace and

drew the remaining trumps which forced North to

led a club towards the ®K-Q-7 forcing North to

split with the nine. Tim simply exited with dummy's

concede the last two club tricks. Easy for the master

This had little to recommend it, 4441 shapes lack

playing strength and the scant values included a

Olivia), who always seemed to find potential in

whatever cards she held, doubled, with few points

spades and a competitive battle ensued with both

showing support for both red suits. Olly felt that the