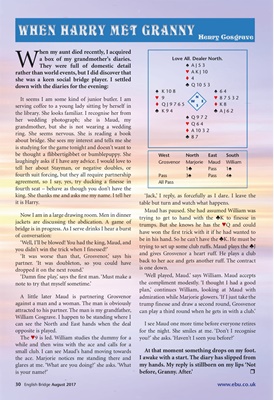 a box of my grandmother's diaries.

They were full of domestic detail

rather than world events, but I did discover that

she was a keen social bridge player. I settled

down with the diaries for the evening:

It seems I am some kind of junior butler. I am

serving coffee to a young lady sitting by herself in

the library. She looks familiar. I recognise her from

her wedding photograph; she is Maud, my

grandmother, but she is not wearing a wedding

ring. She seems nervous. She is reading a book

about bridge. She sees my interest and tells me she

is studying for the game tonight and doesn't want to

be thought a flibbertigibbet or bumblepuppy. She

laughingly asks if I have any advice. I would love to

tell her about Stayman, or negative doubles, or

fourth suit forcing, but they all require partnership

agreement, so I say, yes, try ducking a finesse in

fourth seat - behave as though you don't have the

king. She thanks me and asks me my name. I tell her

Now I am in a large drawing room. Men in dinner

jackets are discussing the abdication. A game of

bridge is in progress. As I serve drinks I hear a burst

'Well, I'll be blowed! You had the king, Maud, and

you didn't win the trick when I finessed!'

'It was worse than that, Grosvenor,' says his

partner. 'It was doubleton, so you could have

dropped it on the next round.'

'Damn fine play,' says the first man. 'Must make a

note to try that myself sometime.'

against a man and a woman. The man is obviously

attracted to his partner. The man is my grandfather,

William Cosgrave. I happen to be standing where I

can see the North and East hands when the deal

The ™9 is led. William studies the dummy for a

while and then wins with the ace and calls for a

small club. I can see Maud's hand moving towards

the ace. Marjorie notices me standing there and

glares at me. 'What are you doing?' she asks. 'What

'Jack,' I reply, as forcefully as I dare. I leave the

table but turn and watch what happens.

Maud has paused. She had assumed William was

trying to get to hand with the ®K to finesse in

trumps. But she knows he has the ™Q and could

trying to set up some club ruffs. Maud plays the ®J

and gives Grosvenor a heart ruff. He plays a club

back to her ace and gets another ruff. The contract

the compliment modestly. 'I thought I had a good

admiration while Marjorie glowers. 'If I just take the

trump finesse and draw a second round, Grosvenor

can play a third round when he gets in with a club.'

I see Maud one more time before everyone retires

for the night. She smiles at me. 'Don't I recognise

At that moment something drops on my foot.

I awake with a start. The diary has slipped from

my hands. My reply is stillborn on my lips 'Not

before, Granny. After.' r