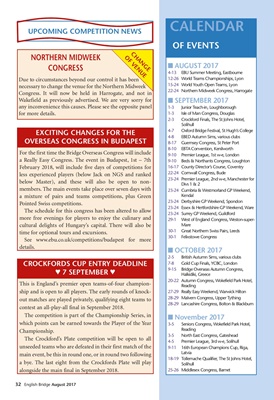 Due to circumstances beyond our control it has been

necessary to change the venue for the Northern Midweek

Congress. It will now be held in Harrogate, and not in

Wakefield as previously advertised. We are very sorry for

any inconvenience this causes. Please see the opposite panel

For the first time the Bridge Overseas Congress will include

a Really Easy Congress. The event in Budapest, 1st - 7th

February 2018, will include five days of competitions for

less experienced players (below Jack on NGS and ranked

below Master), and these will also be open to nonmembers.

The main events take place over seven days with

a mixture of pairs and teams competitions, plus Green

The schedule for this congress has been altered to allow

more free evenings for players to enjoy the culinary and

cultural delights of Hungary's capital. There will also be

time for optional tours and excursions.

and is open to all players. The early rounds of knockout

contest an all-play-all final in September 2018.

The competition is part of the Championship Series, in

which points can be earned towards the Player of the Year

The Crockford's Plate competition will be open to all

unseeded teams who are defeated in their first match of the

main event, be this in round one, or in round two following

a bye. The last eight from the Crockfords Plate will play

alongside the main final in September 2018.