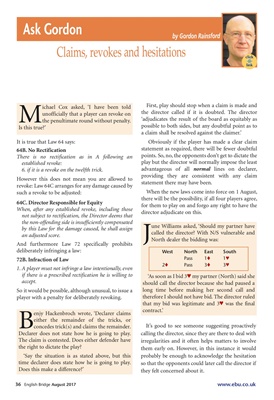 First, play should stop when a claim is made and

the director called if it is doubted. The director

'adjudicates the result of the board as equitably as

possible to both sides, but any doubtful point as to

a claim shall be resolved against the claimer.'

Obviously if the player has made a clear claim

statement as required, there will be fewer doubtful

points. So, no, the opponents don't get to dictate the

play but the director will normally impose the least

advantageous of all normal lines on declarer,

providing they are consistent with any claim

statement there may have been.

When the new laws come into force on 1 August,

there will be the possibility, if all four players agree,

director adjudicate on this.

There is no rectification as in A following an

6. if it is a revoke on the twelfth trick.

However this does not mean you are allowed to

revoke: Law 64C arranges for any damage caused by

such a revoke to be adjusted:

When, after any established revoke, including those

not subject to rectification, the Director deems that

the non-offending side is insufficiently compensated

by this Law for the damage caused, he shall assign

72B. Infraction of Law

1. A player must not infringe a law intentionally, even

if there is a prescribed rectification he is willing to

So it would be possible, although unusual, to issue a

player with a penalty for deliberately revoking.

ichael Cox asked, 'I have been told

unofficially that a player can revoke on

the penultimate round without penalty.

either the remainder of the tricks, or

concedes trick(s) and claims the remainder.

Declarer does not state how he is going to play.

The claim is contested. Does either defender have

the right to dictate the play?

'Say the situation is as stated above, but this

time declarer does state how he is going to play.

Does this make a difference?'

une Williams asked, 'Should my partner have

called the director? With N/S vulnerable and

North dealer the bidding was:

should call the director because she had paused a

long time before making her second call and

therefore I should not have bid. The director ruled

that my bid was legitimate and 3™ was the final

It's good to see someone suggesting proactively

calling the director, since they are there to deal with

irregularities and it often helps matters to involve

them early on. However, in this instance it would

probably be enough to acknowledge the hesitation

so that the opponents could later call the director if

they felt concerned about it.