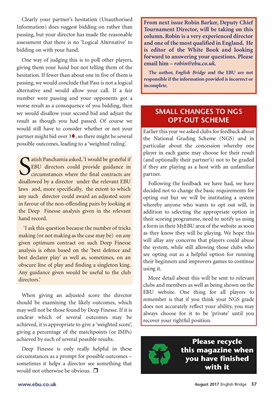 Information) does suggest bidding on rather than

passing, but your director has made the reasonable

assessment that there is no 'Logical Alternative' to

bidding on with your hand.

One way of judging this is to poll other players,

giving them your hand but not telling them of the

hesitation. If fewer than about one in five of them is

passing, we would conclude that Pass is not a logical

alternative and would allow your call. If a fair

number were passing and your opponents got a

worse result as a consequence of you bidding, then

we would disallow your second bid and adjust the

result as though you had passed. Of course we

would still have to consider whether or not your

Tournament Director, will be taking on this

and one of the most qualified in England. He

is editor of the White Book arobin@ebu.co.ukp>forward to answering your questions. Please

The author, English Bridge and the EBU are not

responsible if the information provided is incorrect or

atish Panchamia asked, 'I would be grateful if

EBU directors could provide guidance in

circumstances where the final contracts are

disallowed by a director under the relevant EBU

laws and, more specifically, the extent to which

any such director could award an adjusted score

in favour of the non-offending pairs by looking at

the Deep Finesse analysis given in the relevant

'I ask this question because the number of tricks

making (or not making as the case may be) on any

given optimum contract on such Deep Finesse

analysis is often based on the 'best defence and

best declarer play' as well as, sometimes, on an

obscure line of play and finding a singleton king.

Any guidance given would be useful to the club

When giving an adjusted score the director

should be examining the likely outcomes, which

may well not be those found by Deep Finesse. If it is

unclear which of several outcomes may be

achieved, it is appropriate to give a 'weighted score',

giving a percentage of the matchpoints (or IMPs)

achieved by each of several possible results.

Deep Finesse is only really helpful in these

circumstances as a prompt for possible outcomes -

sometimes it helps a director see something that

would not otherwise be obvious. r

Earlier this year we asked clubs for feedback about

the National Grading Scheme (NGS) and in

particular about the concession whereby one

player in each game may choose for their result

(and optionally their partner's) not to be graded

if they are playing as a host with an unfamiliar

Following the feedback we have had, we have

decided not to change the basic requirements for

opting out but we will be instituting a system

whereby anyone who wants to opt out will, in

addition to selecting the appropriate option in

their scoring programme, need to notify us using

a form in their MyEBU area of the website as soon

as they know they will be playing. We hope this

will allay any concerns that players could abuse

the system, while still allowing those clubs who

see opting out as a helpful option for running

their beginners and improvers games to continue

More detail about this will be sent to relevant

clubs and members as well as being shown on the

remember is that if you think your NGS grade

does not accurately reflect your ability, you may

always choose for it to be 'private' until you