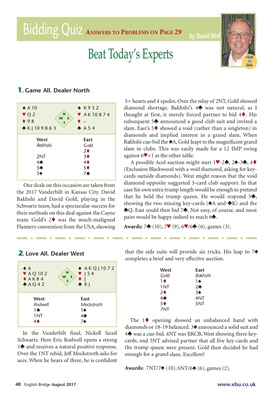 5+ hearts and 4 spades. Over the relay of 2NT, Gold showed

diamond shortage. Bakhshi's 4® was not natural, as I

thought at first, it merely forced partner to bid 4t. His

subsequent 5® announced a good club suit and invited a

slam. East's 5t showed a void (rather than a singleton) in

diamonds and implied interest in a grand slam. When

Bakhshi cue-bid the ´A, Gold leapt to the magnificent grand

slam in clubs. This was easily made for a 12 IMP swing

(Exclusion Blackwood with a void diamond, asking for keycards

diamond opposite suggested 3-card club support. In that

case his own extra trump length would be enough to pretend

that he held the trump queen. He would respond 5®,

showing the two missing key-cards (´A and ®K) and the

pairs would be happy indeed to reach 6®.

Our deals on this occasion are taken from

the 2017 Vanderbilt in Kansas City. David

Bakhshi and David Gold, playing in the

Schwartz team, had a spectacular success for

their methods on this deal against the Cayne

team. Gold's 2t was the much-maligned

Flannery convention from the USA, showing

Bidding Quiz ANSWERS TO PROBLEMS ON PAGE 29 by David Bird

2.Love All. Dealer West that the side suits will provide six tricks. His leap to 7´

The 1t opening showed an unbalanced hand with

diamonds or 18-19 balanced. 3´ announced a solid suit and

4® was a cue-bid. 4NT was RKCB, West showing three keycards,

and 5NT advised partner that all five key-cards and

the trump queen were present. Gold then decided he had

enough for a grand slam. Excellent!

In the Vanderbilt final, Nickell faced

1® and receives a natural positive response.

Over the 1NT rebid, Jeff Meckstroth asks for

aces. When he hears of three, he is confident