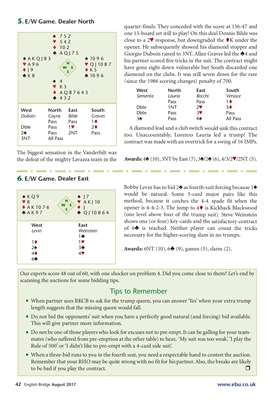 quarter-finals. They conceded with the score at 136-47 and

one 15-board set still to play! On this deal Dennis Bilde was

close to a 2™ response, but downgraded the tK under the

opener. He subsequently showed his diamond stopper and

Giorgio Duboin raised to 3NT. Allan Graves led the ®4 and

his partner scored five tricks in the suit. The contract might

have gone eight down vulnerable but South discarded one

diamond on the clubs. It was still seven down for the rare

A diamond lead and a club switch would sink this contract

too. Unaccountably, Lorenzo Lauria led a trump! The

contract was made with an overtrick for a swing of 16 IMPs.

The biggest sensation in the Vanderbilt was

the defeat of the mighty Lavazza team in the

would be natural. Some 5-card major pairs like this

method, because it catches the 4-4 spade fit when the

(one level above four of the trump suit). Steve Weinstein

shows one (or four) key-cards and the satisfactory contract

of 6® is reached. Neither player can count the tricks

necessary for the higher-scoring slam in no trumps.

Our experts score 48 out of 60, with one shocker on problem 4. Did you come close to them? Let's end by

scanning the auctions for some bidding tips.

• When partner uses RKCB to ask for the trump queen, you can answer 'Yes' when your extra trump

length suggests that the missing queen would fall.

• Do not bid the opponents' suit when you have a perfectly good natural (and forcing) bid available.

This will give partner more information.

• Do not be one of those players who look for excuses not to pre-empt. It can be galling for your teammates

(who suffered from pre-emption at the other table) to hear, 'My suit was too weak', 'I play the

• When a three-bid runs to you in the fourth seat, you need a respectable hand to contest the auction.

Remember that your RHO may be quite strong with no fit for his partner. Also, the breaks are likely

to be bad if you play the contract. r