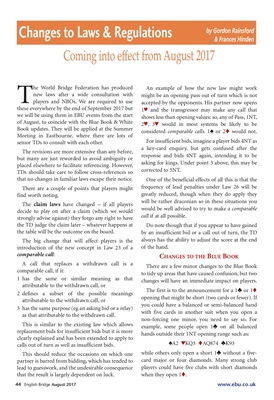 he World Bridge Federation has produced

new laws after a wide consultation with

players and NBOs. We are required to use

these everywhere by the end of September 2017 but

we will be using them in EBU events from the start

of August, to coincide with the Blue Book & White

Book updates. They will be applied at the Summer

Meeting in Eastbourne, where there are lots of

senior TDs to consult with each other.

The revisions are more extensive than any before,

but many are just reworded to avoid ambiguity or

placed elsewhere to facilitate referencing. However,

that no changes in familiar laws escape their notice.

There are a couple of points that players might

The claim laws have changed - if all players

decide to play on after a claim (which we would

strongly advise against) they forgo any right to have

the TD judge the claim later - whatever happens at

the table will be the outcome on the board.

The big change that will affect players is the

introduction of the new concept in Law 23 of a

A call that replaces a withdrawn call is a

comparable call, if it:

1 has the same or similar meaning as that

attributable to the withdrawn call, or

2 defines a subset of the possible meanings

attributable to the withdrawn call, or

as that attributable to the withdrawn call.

This is similar to the existing law which allows

replacement bids for insufficient bids but it is more

clearly explained and has been extended to apply to

calls out of turn as well as insufficient bids.

This should reduce the occasions on which one

partner is barred from bidding, which has tended to

lead to guesswork, and the undesirable consequence

that the result is largely dependent on luck.

An example of how the new law might work

might be an opening pass out of turn which is not

accepted by the opponents. His partner now opens

1™ and the transgressor may make any call that

shows less than opening values: so, any of Pass, 1NT,

considered comparable calls. 1´ or 2t would not.

For insufficient bids, imagine a player bids 4NT as

a key-card enquiry, but gets confused after the

response and bids 4NT again, intending it to be

asking for kings. Under point 3 above, this may be

One of the beneficial effects of all this is that the

frequency of lead penalties under Law 26 will be

greatly reduced, though when they do apply they

will be rather draconian so in these situations you

would be well advised to try to make a comparable

call if at all possible.

Do note though that if you appear to have gained

by an insufficient bid or a call out of turn, the TD

always has the ability to adjust the score at the end

CHANGES TO THE BLUE BOOK

There are a few minor changes to the Blue Book

to tidy up areas that have caused confusion, but two

changes will have an immediate impact on players.

The first is to the announcement for a 1® or 1t

opening that might be short (two cards or fewer). If

you could have a balanced or semi-balanced hand

with five cards in another suit when you open a

non-forcing one minor, you need to say so. For

example, some people open 1® on all balanced

hands outside their 1NT opening range such as:

while others only open a short 1® without a fivecard

players could have five clubs with short diamonds

when they open 1t.

Coming into effect from August 2017