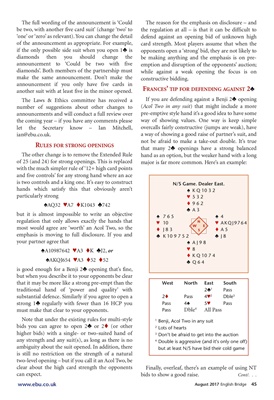 The full wording of the announcement is 'Could

be two, with another five card suit' (change 'two' to

'one' or 'zero' as relevant). You can change the detail

of the announcement as appropriate. For example,

if the only possible side suit when you open 1® is

diamonds then you should change the

announcement to 'Could be two with five

diamonds'. Both members of the partnership must

announcement if you only have five cards in

another suit with at least five in the minor opened.

The Laws & Ethics committee has received a

number of suggestions about other changes to

announcements and will conduct a full review over

the coming year - if yian@ebu.co.ukomments please

The other change is to remove the Extended Rule

with the much simpler rule of '12+ high card points

and five controls' for any strong hand where an ace

is two controls and a king one. It's easy to construct

hands which satisfy this that obviously aren't

but it is almost impossible to write an objective

regulation that only allows exactly the hands that

most would agree are 'worth' an Acol Two, so the

emphasis is moving to full disclosure. If you and

your partner agree that

is good enough for a Benji 2® opening that's fine,

but when you describe it to your opponents be clear

traditional hand of 'power and quality' with

substantial defence. Similarly if you agree to open a

strong 1® regularly with fewer than 16 HCP you

must make that clear to your opponents.

Note that under the existing rules for multi-style

higher bids) with a single- or two-suited hand of

any strength and any suit(s), as long as there is no

ambiguity about the suit opened. In addition, there

is still no restriction on the strength of a natural

two-level opening - but if you call it an Acol Two, be

clear about the high card strength the opponents

The reason for the emphasis on disclosure - and

the regulation at all - is that it can be difficult to

defend against an opening bid of unknown high

card strength. Most players assume that when the

opponents open a 'strong' bid, they are not likely to

be making anything and the emphasis is on preemption

and disruption of the opponents' auction;

while against a weak opening the focus is on

FRANCES' TIP FOR DEFENDING AGAINST 2®

If you are defending against a Benji 2® opening

(Acol Two in any suit) that might include a more

pre-emptive style hand it's a good idea to have some

way of showing values. One way is keep simple

a way of showing a good raise of partner's suit, and

not be afraid to make a take-out double. It's true

that many 2® openings have a strong balanced

hand as an option, but the weaker hand with a long

1 Benji, Acol Two in any suit

3 Don't be afraid to get into the auction

4 Double is aggressive (and it's only one off)

but at least N/S have bid their cold game