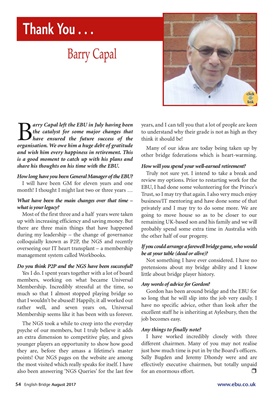 arry Capal left the EBU in July having been

the catalyst for some major changes that

have ensured the future success of the

organisation. We owe him a huge debt of gratitude

and wish him every happiness in retirement. This

is a good moment to catch up with his plans and

share his thoughts on his time with the EBU.

How long have you been General Manager of the EBU?

I will have been GM for eleven years and one

month! I thought I might last two or three years …

What have been the main changes over that time -

what is your legacy?

Most of the first three and a half years were taken

up with increasing efficiency and saving money. But

there are three main things that have happened

during my leadership - the change of governance

colloquially known as P2P, the NGS and recently

overseeing our IT heart transplant - a membership

Do you think P2P and the NGS have been successful?

Yes I do. I spent years together with a lot of board

members, working on what became Universal

Membership. Incredibly stressful at the time, so

much so that I almost stopped playing bridge so

that I wouldn't be abused! Happily, it all worked out

rather well, and seven years on, Universal

Membership seems like it has been with us forever.

The NGS took a while to creep into the everyday

psyche of our members, but I truly believe it adds

an extra dimension to competitive play, and gives

younger players an opportunity to show how good

they are, before they amass a lifetime's master

points! Our NGS pages on the website are among

the most visited which really speaks for itself. I have

also been answering 'NGS Queries' for the last few

years, and I can tell you that a lot of people are keen

to understand why their grade is not as high as they

think it should be!

Many of our ideas are today being taken up by

other bridge federations which is heart-warming.

How will you spend your well-earned retirement?

Truly not sure yet. I intend to take a break and

review my options. Prior to restarting work for the

EBU, I had done some volunteering for the Prince's

Trust, so I may try that again. I also very much enjoy

business/IT mentoring and have done some of that

privately and I may try to do some more. We are

going to move house so as to be closer to our

remaining UK-based son and his family and we will

probably spend some extra time in Australia with

the other half of our progeny.

If you could arrange a farewell bridge game, who would

be at your table (dead or alive)?

Not something I have ever considered. I have no

pretensions about my bridge ability and I know

Any words of advice for Gordon?

Gordon has been around bridge and the EBU for

so long that he will slip into the job very easily. I

have no specific advice, other than look after the

excellent staff he is inheriting at Aylesbury, then the

Any things to finally note?

I have worked incredibly closely with three

different chairmen. Many of you may not realise

just how much time is put in by the Board's officers.

Sally Bugden and Jeremy Dhondy were and are

for an enormous effort. r