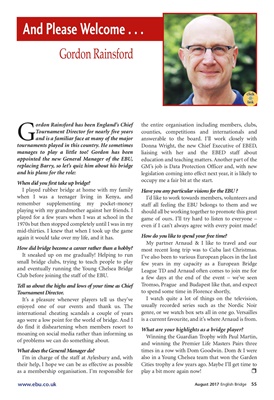 ordon Rainsford has been England's Chief

and is a familiar face at many of the major

tournaments played in this country. He sometimes

manages to play a little too! Gordon has been

appointed the new General Manager of the EBU,

replacing Barry, so let's quiz him about his bridge

and his plans for the role:

When did you first take up bridge?

I played rubber bridge at home with my family

when I was a teenager living in Kenya, and

playing with my grandmother against her friends. I

1970s but then stopped completely until I was in my

mid-thirties. I knew that when I took up the game

again it would take over my life, and it has.

How did bridge become a career rather than a hobby?

It sneaked up on me gradually! Helping to run

Club before joining the staff of the EBU.

It's a pleasure whenever players tell us they've

enjoyed one of our events and thank us. The

ago were a low point for the world of bridge. And I

do find it disheartening when members resort to

moaning on social media rather than informing us

of problems we can do something about.

What does the General Manager do?

I'm in charge of the staff at Aylesbury and, with

their help, I hope we can be as effective as possible

as a membership organisation. I'm responsible for

the entire organisation including members, clubs,

counties, competitions and internationals and

answerable to the board. I'll work closely with

liaising with her and the EBED staff about

education and teaching matters. Another part of the

GM's job is Data Protection Officer and, with new

legislation coming into effect next year, it is likely to

occupy me a fair bit at the start.

Have you any particular visions for the EBU ?

staff all feeling the EBU belongs to them and we

should all be working together to promote this great

game of ours. I'll try hard to listen to everyone -

even if I can't always agree with every point made!

How do you like to spend your free time?

My partner Arnaud & I like to travel and our

most recent long trip was to Cuba last Christmas.

I've also been to various European places in the last

few years in my capacity as a European Bridge

League TD and Arnaud often comes to join me for

a few days at the end of the event - we've seen

to spend some time in Florence shortly,

I watch quite a lot of things on the television,

usually recorded series such as the Nordic Noir

genre, or we watch box sets all in one go. Versailles

is a current favourite, and it's where Arnaud is from.

What are your highlights as a bridge player?

times in a row with Dom Goodwin. Dom & I were

also in a Young Chelsea team that won the Garden

Cities trophy a few years ago. Maybe I'll get time to