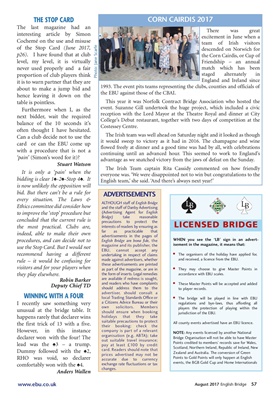 The last magazine had an

Cochemé on the use and misuse

level, my level, it is virtually

never used properly and a fair

it is to warn partner that they are

about to make a jump bid and

hence leaving it down on the

Furthermore when I, as the

next bidder, wait the required

balance of the 10 seconds it's

often thought I have hesitated.

Can a club decide not to use the

card or can the EBU come up

with a procedure that is not a

It is only a 'pain' when the

is now unlikely the opposition will

bid. But there can't be a rule for

every situation. The Laws &

Ethics committee did consider how

to improve the 'stop' procedure but

concluded that the current rule is

the most practical. Clubs are,

indeed, able to make their own

procedures, and can decide not to

use the Stop Card. But I would not

recommend having a different

rule - it would be confusing for

visitors and for your players when

WINNING WITH A FOUR

I recently saw something very

unusual at the bridge table. It

the first trick of 13 with a five.

However, in this instance

declarer won with the four! The

Dummy followed with the ´2,

RHO was void, so declarer

comfortably won with the ´4.

WHEN you see the 'LB' sign in an ad vert isement

in the magazine, it means that:

• The organisers of the holiday have applied for,

and received, a licence from the EBU.

• They may choose to give Master Points in

• These Master Points will be accepted and added

• The bridge will be played in line with EBU

regulations and bye-laws, thus affording all

players the protection of playing within the

jurisdiction of the EBU.

Bridge Organisation will not be able to have Master

Points credited to members' records save for Wales,

Zealand and Australia. The conversion of Green

Points to Gold Points will only happen at English

ALTHOUGH staff of English Bridge

and the staff of Danby Advertising

precautions to protect the

interests of readers by ensuring as

far as practicable that

advertisements in the pages of

English Bridge are bona fide, the

magazine and its publisher, the

undertaking in respect of claims

made against advertisers, whether

these advertisements are printed

as part of the magazine, or are in

the form of inserts. Legal remedies

are available if redress is sought,

and readers who have complaints

should address them to the

advertiser, should consult a

a Citizens Advice Bureau or their

should ensure when booking

holidays that they take

their booking: check the

company is part of a relevant

card. Readers should note that

prices advertised may not be

accurate due to currency

excitement in June when a

descended on Norwich for

the Corn Cairdis, or Cup of

match which has been

England and Ireland since

1993. The event pits teams representing the clubs, counties and officials of

the EBU against those of the CBAI.

This year it was Norfolk Contract Bridge Association who hosted the

College's Debut restaurant, together with two days of competition at the

it would sweep to victory as it had in 2016. The champagne and wine

flowed freely at dinner and a good time was had by all, with celebrations

continuing until an advanced hour. This seemed to work to England's

advantage as we snatched victory from the jaws of defeat on the Sunday.

The Irish Team captain Rita Cassidy commented on how friendly

everyone was. 'We were disappointed not to win but congratulations to the

English team,' she said. 'And there's always next year!'