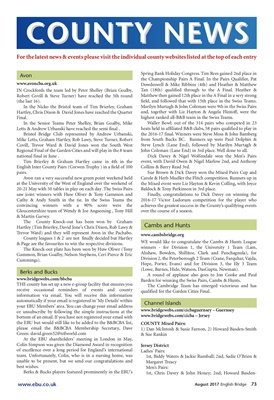 IN Crockfords the team led by Peter Shelley (Brian Goalby,

Robert Covill & Steve Turner) have reached the 5th round

In the Nicko the Bristol team of Tim Brierley, Graham

Tim Brierley & Graham Hartley came in 4th in the

English Inter County Pairs (Corwen Trophy ) in a field of 100

Cathy & Andy Smith in the tie. In the Swiss Teams the

convincing winners with a 90% score were the

The County Knock-out has been won by Graham

Trevor Ward) and they will represent Avon in the Pachabo.

County leagues 1 & 2 are not finally decided but Hartley

& Page are the favourites to win the respective divisions.

The Knock-out plate has been won by Huw Oliver (Tony

information via email. You will receive this information

automatically if your email is registered in 'My Details' within

your EBU Members' area. You can change your email address

or udavid.green52@ntlworld.come simple instructions at the

bottom of an email. If you have not registered your email with

At the EBU shareholders' meeting in London in May,

Colin Simpson was given the Diamond Award in recognition

of excellence over a long period for England's international

team. Unfortunately, Colin, who is in a nursing home, was

unable to be present, but we send our congratulations and

the Championship Pairs A Final. In the Pairs Qualifier, Pat

Tan (18th) qualified through to the A Final. Heather &

field, and followed that with 15th place in the Swiss Teams.

Marilyn Murtagh & John Coleman were 9th in the Swiss Pairs

and, together with Liz Hayton & Angela Flintoff, were the

from South Bucks BC. Runners up were Paul Dolphin &

Carole & Herb Mueller the Flitch competition. Runners up in

the Mixed event were Liz Hayton & Kevin Colling, with Joyce

Finally, congratulations to Dick Davey on winning the

2016-17 Victor Ludorum competition for the player who

achieves the greatest success in the County's qualifying events

over the course of a season.

WE would like to congratulate the Cambs & Hunts League

Hope, Porter, Evans) and for Division 3, the Ely 3 Team

A round of applause also goes to Jon Cooke and Paul

The Cambridge Team has emerged victorious and has

qualified for the Garden Cities Final.