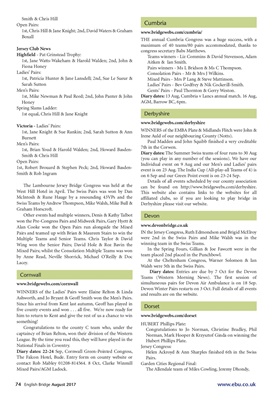 The Lambourne Jersey Bridge Congress was held at the

West Hill Hotel in April. The Swiss Pairs was won by Dan

McIntosh & Rune Hauge by a resounding 43VPs and the

Alan Cooke won the Open Pairs run alongside the Mixed

Pairs and teamed up with Brian & Maureen Stairs to win the

Mixed Pairs; whilst the Consolation Multiple Teams was won

WINNERS of the Ladies' Pairs were Elaine Relton & Linda

Since his arrival from Kent last autumn, Geoff has played in

Congratulations to the county C team who, under the

captaincy of Brian Relton, won their division of the Western

League. By the time you read this, they will have played in the

The Falcon Hotel, Bude. Entry form on county website or

THE annual Cumbria Congress was a huge success, with a

maximum of 40 teams/80 pairs accommodated, thanks to

WINNERS of the EMBA Plate & Midlands Flitch were John &

7th in the Corwen.

(you can play in any number of the sessions). We have our

Individual event on 9 Aug and our Men's and Ladies' pairs

Details of all events scheduled by our county association

can be found on http://www.bridgewebs.com/derbyshire.

This website also contains links to the websites for all

affiliated clubs, so if you are looking to play bridge in

IN the Jersey Congress, Ruth Edmondson and Brigid McElroy

winning team in the Swiss Teams.

In the Spring Fours, Gillian & Joe Fawcett were in the

Walsh were 5th in the Swiss Pairs.

Diary dates: Entries are due by 7 Oct for the Devon

simultaneous pairs for Devon Air Ambulance is on 18 Sep.