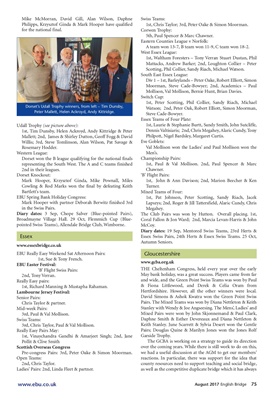 for the national final.

The Club Pairs was won by Hutton. Overall placing. 1st,

THE Cheltenham Congress, held every year over the early

May bank holiday, was a great success. Players came from far

and wide, and the Green Point Swiss Teams was won by Paul

Hertfordshire. However, all the other winners were local.

Pairs. The Mixed Teams was won by Diana Nettleton & Keith

Stanley with Wendy & Joe Angseesing. The Mens', Ladies' and

The GCBA is working on a strategy to guide its direction

over the coming years. While there is still work to do on this,

reactions. In particular, there was support for the idea that

as well as the competitive duplicate bridge which it has always

Dorset won the B league qualifying for the national finals

representing the South West. The A and C teams finished

2nd in their leagues.

in the Swiss Pairs.