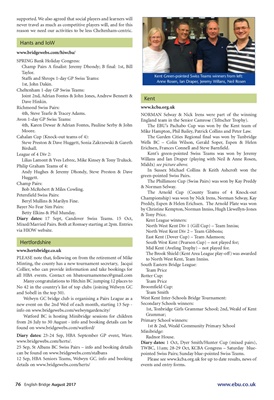 supported. We also agreed that social players and learners will

never travel as much as competitive players will, and for this

reason we need our activities to be less Cheltenham-centric.

Mixed/Married Pairs. Both at Romsey starting at 2pm. Entries

PLEASE note that, following on from the retirement of Mike

Minting, the county has a new tournament secretary, Jacqui

Collier, who can provide information and take bookings for

Many congratulations to Hitchin BC jumping 12 places to

Welwyn GC bridge club is organising a Pairs League as a

new event on the 2nd Wed of each month, starting 13 Sep info

Watford BC is hosting Minibridge sessions for children

can be found on www.bridgewebs.com/stalbans

NORMAN Selway & Nick Irens were part of the winning

The EBU's Pachabo Cup was won by the Kent team of

The Garden Cities Regional final was won by Tunbridge

The Phillimore Cup (Swiss Pairs) was won by Kay Preddy

Please see www.kcba.org.uk for up to date results, news of