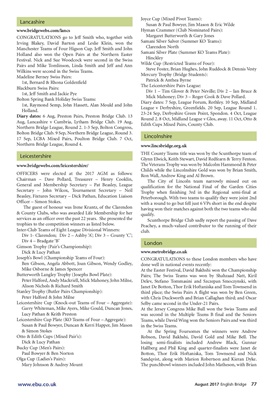 CONGRATULATIONS go to Jeff Smith who, together with

Holland also won the Open Pairs at the Northern Easter

Festival. Nick and Sue Woodcock were second in the Swiss

Pairs and Mike Tomlinson, Linda Smith and Jeff and Ann

Wilkins were second in the Swiss Teams.

OFFICERS were elected at the 2017 AGM as follows:

The guest of honour was Irene Krantz, of the Clarendon

& County Clubs, who was awarded Life Membership for her

services as an officer over the past 22 years. She presented the

trophies to the competition winners as listed below.

THE County Teams title was won by the Scunthorpe team of

The Veterans Trophy was won by Malcolm Hammond & Peter

Childs while the Lincolnshire Gold was won by Brian Smith,

The City of Lincoln team narrowly missed out on

qualification for the National Final of the Garden Cities

Trophy when finishing 3rd in the Regional semi-final at

Peterborough. With two teams to qualify they were joint 2nd

having won their matches against both the two teams who did

Peachey, a much-valued contributor to the running of their

CONGRATULATIONS to these London members who have

At the Easter Festival, David Bakhshi won the Championship

Pairs; The Swiss Teams was won by Shahzaad Natt, Kiril

third place; the Swiss Pairs A flight was won by Ben Green,

with Chris Duckworth and Brian Callaghan third; and Oscar

Selby came second in the Under-21 Pairs.

At the Jersey Congress Mike Bull won the Swiss Teams and

was second in the Multiple Teams B final and the Seniors

Teams, while David Wing won the Seniors Pairs and was third

in the Swiss Teams.

At the Spring Foursomes the winners were Andrew

Hallberg and Phil King and quarter-finalists were Janet de

Sandqvist, along with Marion Robertson and Kieran Dyke.