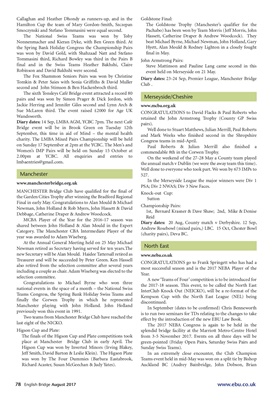 Callaghan and Heather Dhondy as runners-up, and in the

The National Swiss Teams was won by Toby

Nonnenmacher and Kieran Dyke, with Ben Green third. At

was won by David Gold, with Shahzaad Natt and Stefano

Tommasini third, Richard Bowley was third in the Pairs B

final and in the Swiss Teams Heather Bakhshi, Claire

Robinson and David Bakhshi were second.

The Fox Shammon Seniors Pairs was won by Christine

pairs and was won by Simon Prager & Dick Jordon, with

Bridge event will be in Brook Green on Tuesday 12th

September, this time in aid of Mind - the mental health

charity. The LMBA Mixed Pairs Championship will be held

on Sunday 17 September at 2pm at the YCBC. The Men's and

2.00pm at YCBC. All enquiries and entries to

MANCHESTER Bridge Club have qualified for the final of

the Garden Cities Trophy after winning the Bradford Regional

Final in early May. Congratulations to Alan Mould & Michael

shared between John Holland & Alan Mould in the Expert

Category. The Manchester CBA Intermediate Player of the

year was awarded to Adam Wiseberg.

At the Annual General Meeting held on 25 May Michael

Newman retired as Secretary having served for ten years.The

new Secretary will be Alan Mould. Haidee Tattersall retired as

Treasurer and will be succeeded by Peter Green. Ken Hassell

also retired from the selection committee after several years

including a couple as chair. Adam Wiseberg was elected to the

national events in the space of a month - the National Swiss

finally the Corwen Trophy in which he represented

previously won this event in 1991.

Two teams from Manchester Bridge Club have reached the

last eight of the NICKO.

The finals of the Higson Cup and Plate competitions took

place at Manchester Bridge Club in early April. The

was won by The Four Dummies (Barbara Eastabrook,

The Goldstone Trophy (Manchester's qualifier for the

Pachabo) has been won by Team Morris (Jeff Morris, John

Steve Mattinson and Pauline Lang came second in this

event held on Merseyside on 21 May.

and Mark Weeks who finished second in the Shropshire

commendable 8th in the Corwen Trophy.

the annual match v Dublin (we were the away team this time).

Well done to everyone who took part. We won by 673 IMPs to

In the Merseyside League the major winners were Div 1

CONGRATULATIONS go to Frank Springett who has had a

most successful season and is the 2017 NEBA Player of the

A new 'Teams of Four' competition is to be introduced for

InterClub Knock Out (NEICKO), will be a re-format of the

Kempson Cup with the North East League (NEL) being

In September (dates to be confirmed) Chris Benneworth

effect by the introduction of the new EBU Law Book.

The 2017 NEBA Congress is again to be held in the

In an extremely close encounter, the Club Champion